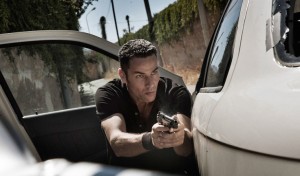 Saleh Bakri is Salvo Mancuso, a Palermo gangster who, in the rat-a-tat opening sequence of Salvo, protects his boss from an assassination attempt and hunts down Renato Pizzuto, the man responsible for ordering the hit. Murdering Renato, Salvo falls immediately for his blind sister Rita (Sara Serraiocco), and – unable to kill her too – takes her captive at an abandoned industrial complex. Miraculously, upon their first physical contact, Rita begins to see things – and gradually gains sight thereafter.

Minimal in plot, writer-directors Fabio Grassadonia and Antonio Piazza rely on atmosphere and the curious relationship at their film’s centre to sustain dramatic interest. Because Salvo and Rita’s screen-time together is limited – indeed, much of the film is spent at the apartment where Salvo is in hiding, accommodated by a married couple who bicker over the air conditioning, power surges and their pet dog – this stylish, low-key drama-cum-thriller evinces a patient build-up before belatedly coming to life. Trimmed from its 105 minute running time, it could be made as lean as its leading performer – though it had enough panache and curio charm to win the top prize at Critics Week in Cannes earlier this year.

The Stockholm Syndrome fantasy around which Salvo revolves recalls Pedro Almodóvar’s Tie Me Up! Tie Me Down! (1990), though this lacks the dynamic and erotic charge of that film – and takes much longer to get going. Other comparators include Wait Until Dark (1967) and The Collector (1965) – though Grassadonia and Piazza instil enough oddball intrigue to keep things their own. The opening scene unfolds like a kinetic first- and third-person shoot-em-up videogame, while in the consequent sequence, in which Salvo stalks Renato’s house waiting for his target to return home, the directors effectively switch between his vantage point and that of Rita, invoking much tension through sound. The whole thing is handsomely shot by cinematographer Daniele Caprì, who directed one of the most underappreciated films at last year’s London Film Festival, It Was the Son.

By coincidence, Salvo has some thematic overlaps with another film screening at London Film Festival this week: Eastern Boys, in which two people also meet in unusual and perhaps problematic circumstances. And like that film too, this one never fully settles into one genre for long, accumulating a strange and unexpected likeability for both of its characters, so that even when the narrative seems suddenly stretched, we’re ready to roll with it.