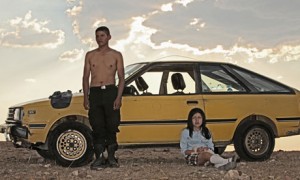 This gritty Mexican drug drama – the third from Amat Escalante after Sangre and Los Bastardos – won Amat Escalante the Best Director Award at this year’s Cannes. It is a feature that exposes the negative effects of globalization and American culture on Mexican society. Escalante has roots with both countries, thus the film hits a personal note.

Heli begins by introducing us to one family. Heli (Armando Espitia) is a young man who works in an automobile factory and lives in a modest, cramped home with his wife, baby daughter, father and young sister. His sister Estella (Andrea Vergara) is just twelve, and starting a romance with young police cadet Alberto (Juan Eduardo Palacios). The scenes where the two are alone in his car together are wince-inducing – she’s so tiny and child-like – but if there’s one thing Heli successfully achieves is making you shift around uncomfortably in your seat.

Alberto proposes to her and they agree to move away together and fulfill their marital dream – but as an attempt to help their plan Alberto makes a terrible error – and consequently he and Estella’s innocent family become embroiled in drug violence. Escalante holds no punches with his extremism here. One torture scene and a shocking moment with an adorable puppy induced involuntary yelps from the audience, moments that are presented with a remarkable, unrestrained frankness. Nothing is sensationalized, built up or exaggerated, a clear mirror of how Mexican news reports think nothing of showing decapitated heads on daytime television.

Although Escalante succeeds in creating a sense of place, atmosphere and social context – plus creating several memorable moments that will happily burn themselves onto your brain and remain there – the film’s latter half doesn’t live up to the intensity of the former. After a point the narrative trundles along until it isn’t clear where it wants to be. The first half establishes a tense plot, while the second has no real structure and merely observes the aftermath until the film fizzles out. Likewise – the sub-plot of Heli’s sexual struggles with his wife are a tad redundant – and the final scene is a misjudged climax. Nonetheless, Heli does well at articulating the fear that is permanently ingrained in the psyche of a region where violence and corruption are second nature.