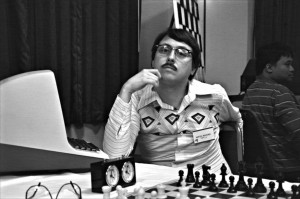 The more advanced technology gets the more we hanker for the human, the tangible, the deficiencies that suggest personality and life. Computer Chess is a comedy about imperfect people struggling with imperfect machines to create a computer to beat a human at chess.

This is the 1980s and to create an authentic feel the film has been shot on obsolete video cameras that create soft, flat, grey images. The players are also grey and suitably awkward, seemingly sacrificing their personalities in the endeavour of technological advancement. Pitting themselves against each other they act as data entry clerks and wait in hope for their computers to choose the next move. This is the time before pretty PCs and these ugly machines are an imposing presence that must be lugged and wheeled around by their careful owners.

The competition takes place over one weekend at an anonymous hotel. The participants include a team from MIT featuring the lone woman (who inspires fear and excitement by her mere presence); Peter the apprentice in the team of reigning champions; and Michael Papageorge the maverick. Papageorge is the self-styled loose canon but the more we see of him the more we see his world slipping away. Without a room of his own he wanders around the hotel corridors hoping to make a connection. It’s not just him with problems: the players seem to be a mix of bores and those lost at sea.

But it’s not just computer chess players at this hotel, there is also a New Age therapy group or cult (depending on your viewpoint) that provides the comedy that is generally lacking. The film is strongest when these two worlds collide with Chris Doubekand and Cyndi Williams brilliant as the couple that seem just a tad too friendly.

Mumblecore director Andrew Bujalski brings a sense of unadorned realism to proceedings creating an utterly convincing netherworld. Unfortunately this original film fails to satisfy. Whereas in Pablo Larraín’s No the video look seemed intrinsic to the story here the look and vintage effects feel more like affectation. Bujalski is not afraid to push towards the absurd or surreal but he never takes it quite far enough. As this game plays out no story strand or character is satisfactorily developed resulting in the audience becoming as befuddled as these techno explorers.