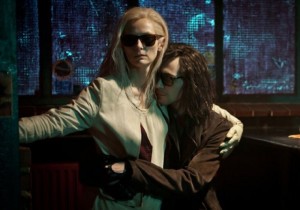 Like Wes Anderson, Jim Jarmusch is one of those US auteurs whose distinct style and influence upon contemporaries has brought both a loyal fanbase and a more predatory pack of critics who dislike his work but go to see his films anyway, waiting to dish out ad hominem accusations of being or having “too much of the same thing”. Nobody can fault Jarmusch for doing his own thing – nor can they deny the considerable panache with which he does it – but in recent years his deadpan shtick has indeed risked that drift into stagnant territory, whereby each film feels like it was made with both hands tied behind the back, a blindfold across the face and the “autopilot” meter set to maximum. Effortless, yes. But also maybe underwhelming.

Only Lovers Left Alive is Jarmusch’s eleventh feature and his first since 2009’s The Limits of Control. Starring Tilda Swinton and Tom Hiddleston, it is another culture-clash comedy like Ghost Dog: The Way of the Samurai (1999). That film pitted Hip-Hop against La Cosa Nostra by way of an ancient samurai code as embellished in the films of Jean-Pierre Melville; Jarmusch’s latest sees somnambulant rocker Adam (Hiddleston) shacked up in an abandoned home in depopulated Detroit while wife Eve (Swinton) wiles away the centuries in Tangiers. Both are vampires. When Eve arrives in Detroit to reunite with her lover, however, their resumed romance is short-lived: Eve’s younger sister Ava (Mia Wasikowska) shows up, and her boisterousness upsets Adam’s suicidally romantic grouchiness. In appearance if not in manner, Hiddleston recalls Sean Penn’s turn as an emo kid in a goth adult’s body in This Must Be the Place (2011).

Appreciably slight, Only Lovers is also unbearably long. Though there is much to be said about the social and economic plight of Detroit – a city with strong musical and industrial heritages – Jarmusch doesn’t seem to have much interest in it other than as a place to have his handsome cast mooch and smooch and partake in as little social interaction as possible. Belatedly, the film comes to life when Adam, Eve and Ava attend a rock gig, with Ava dangerously flirting with humans and putting their age-old disguise at risk. Seen too infrequently, John Hurt enlivens proceedings as Christopher Marlowe, who amusingly reveals (or confirms) Shakespeare’s lines were his own, reciting the Bard’s 116th Sonnet. All of which is to say this is fun, cool and not up to much.

Production values are immaculate. Yorick Le Saux’s cinematography lends an eerie quality to both Detroit and Tangiers as twinned underworlds in which those on society’s margins must band together. And as expected for a Jarmusch film, the soundtrack enriches the work – in this instance, it is Dutch composer Jozef van Wissem who has been given sonic duties, following two albums, both released in 2012, in collaboration with the film’s director. But the parts are distinctly better than the whole.