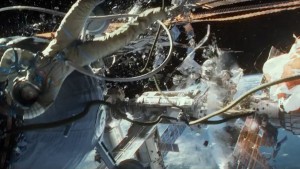 The best thing about Brian De Palma’s Mission to Mars (2000) is arguably that sequence in which Tim Robbins’ astronaut protagonist drifts toward the hull of a space shuttle. Without anything physical in the immediate vicinity by which to grasp a sense of the character’s own weight, Robbins appears to be floating at a moderate pace, and so when he finally hits the metal hull at a breakneck speed, it comes as something of a shock. Whatever else might be lacking in that film, its space scenes at least have what is referred to in the videogame industry as “good physics”.

Gravity, the first film by Alfonso Cuarón since 2006’s Children of Men, is all physics – and all good physics. Transferring a bare-bones lost-at-sea plot to the outer cusp of the earth’s atmosphere – in which two astronauts (Sandra Bullock and George Clooney) find themselves stranded in orbit – Cuarón’s latest is a top-to-bottom masterclass in technical filmmaking, achieving an unparalleled sense of what it might be like to be in space. As Children of Men made evident, Cuarón is a sucker for detail, and at points in Gravity you wonder if what drew him to this material were the many formal challenges it posed.

Those long-take setpieces that defined Children of Men (and 2000’s Y Tu Mama Tambien before it) have become the overriding structuring principle here, as evinced in the patient, calm-before-the-storm opening, in which Clooney makes wisecracks to Houston while Bullock’s mission specialist attends to a routine technical problem.

Sure enough, things go wrong, and Cuarón and co. are drawn to the “cool factor” of the mounting peril: the obliterated face of a fellow astronaut killed instantly by high-speed flak, or the isolated flames of a burgeoning fire inside a space pod without gravity. But Cuarón is also an audaciously positive filmmaker, unafraid to send a star name like Clooney to an early death, allowing Bullock to take the controls and steer the rest of the film with convincing and exceptionally emotional sweep.

For a space film whose opening card reminds us that everything in space is silent, Gravity has a surprisingly voluminous non-diegetic soundscape, ranging from deep, bassy rumbles to a beautifully measured crescendo of cosmic angst. As a kind of riposte to Kubrick’s phallic mise-en-scène, this is a stunningly and refreshingly female space – in both senses of the word – which more than earns that symbolic shot, midway through, of Bullock framed as a foetus in a womb-like shuttle, one whose umbilical cord is prematurely severed. And her first steps are stirring indeed.