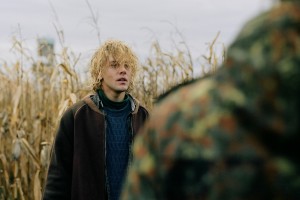 Why make one film when you can make several? That’s a question that Xavier Dolan might have started out with when embarking upon his fourth feature Tom at the Farm (Tom à la ferme), so busy and overwrought is the final product. Barely off screen and credited multiple times in its closing sequence, Dolan clearly fancies himself as a modern-day renaissance man. But while he has ideas to burn, this most recent effort feels both half-baked and overcooked.

But for his shaggy peroxide locks, Dolan resembles here a younger Dirk Bogarde in Victim. He plays the eponymous protagonist, an advertising agency editor who arrives at a remote farm to mourn the death and attend the funeral of his 25-year-old boyfriend Guillaume. Guillaume’s mother (Lise Roy) is either unaware or in denial of Guillaume’s sexuality, and so Tom must play along (“we were co-workers, friends, comrades…”). In fabricating truths, Tom is aided by Guillaume’s brother Francis (Pierre-Yves Cardinal), a brooding Ben Affleck type who seemingly threatens people out of earshot at the funeral. Tom is forced to stay at the farm and help out.

Bonding over the birth of a calf and an impromptu tango to Gotan Project, our protagonist begins to trust and admire Francis. Stockholm Syndrome ensues – but who is deluding whom? Dolan deliberately pushes things, emotionally, so that otherwise innocuous incidents are given an incongruously melodramatic sweep. At other times, the would-be sinister tone has a comic edge. We cut frequently from some kind of respite to a shot in which Tom is tending to a facial or bodily injury – which we presume he has acquired at the hands of Francis.

The conflicting registers are part of the fun here. Just as Guillaume is posthumously revealed as a bisexual, the film itself resists and spans categorisation. Even when Tom learns the truth about Francis in a boozer named Les vraies affaires (“The Real Thing”), the lighting has a dreamlike quality. The paranoia Tom feels upon learning why Francis is barred from the establishment pervades the film, and lingers like a musky dusk up to its denouement – which is so cryptic that one either smirks along with it or laughs out loud in exasperation.

Did Dolan cook all this up during a funeral? Apparently not: he’s adapted with Michel Marc Bouchard from the latter’s stage play – which only seems to add to the curiosity. Those looking for some kind of in-road into this enigma – in thematic if not narrative terms – might do well to pay attention in its opening moments, in which a felt-tip pen scribbles on a napkin (you can imagine the film’s genesis coming about in similar fashion): “Today,” so subtitles translate, “part of me has died and I cannot cry, for I’ve forgotten all synonyms for sadness. Now, all I can do without you is replace you.” Latent longing, dormant emotions and sexual substitutes? Maybe. But then the pen scribbles: “Fuck this.”