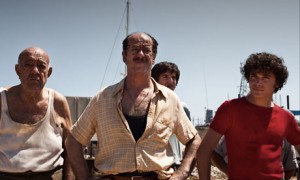 It Was the Son (È stato il figlio), Daniele Ciprì’s solo directorial debut, begins in a waiting room in which a deadpan raconteur reveals to anyone within earshot how he once knew a man who was killed by his own son… over a scratched car. That a seemingly trivial incident resulted in such a disproportionate response is telling of the film as a whole: with grand designs and operatic gestures, the film wears an exhausting tragicomedy on its anecdotal sleeve, threading social commentary through a tall tale of folly.

Recalling Pietro Germi’s notable melodrama Seduced and Abandoned (1964), Ciprì and Massimo Guardioso’s script concerns the Ciraulos, a family in one of the most impoverished suburbs of Camorra-infested Palermo, Sicily. Headed by humble patriarch Nico (Toni Servillo), the Ciraulos live out an existence whose daily bread is won by selling scrap. Their fortunes change, however, when they receive a belated government payout following the death of their daughter during a gangland crossfire. Nico suggests they buy a Mercedes, which becomes the overnight joy not only of the family, but their neighbourhood. The vehicle, furthermore, is that with which the opening flashback began.

Because its denouement is known to us from the outset, It Was the Son progresses with its tragedy secured. Revealing the prolonged sweep of events that lead to the death of an otherwise routine character, however, lends the film a great deal of absurdity; we are reminded of its dramatic inevitability often, whenever it returns to the contemporary frame of the waiting room, from where this narrative is recounted.

The film is polished. To begin with, as one might expect of a work whose purpose is to account in emotional terms for the death of its main character, It Was the Son is narratively tight and dramatically plausible, contextualising its story in socioeconomic terms. There’s a suitably rustic tint to its cinematography, meanwhile: a dusty nostalgia that distances us from proceedings while evoking time, place and tone; the tension between visual composition and performance places the film somewhere between artifice and naturalism. To this end, an early moment in which Nico initiates a song with an unlikely choir of dockworkers is sublime: at once organic and shaped, it epitomises the film’s odd and invigorating musicality.

As Nico, though, Servillo is the heart of the film’s energies. His is a typically rich performance and, if versatility is to be championed, he provides further evidence that he’s one of the best actors currently working in cinema. More animated here than in better-known roles, Servillo eschews caricature with singular precision. One of the first instances in which we see Nico is during a mass workplace march. If his side-footed gait and puffed-up chest suggest self-respect, his occasional glance to fellow protesters makes it clear that such poise is dependent upon collective solidarity, and it is the lack of economic stability thereafter that anchors his family’s undoing.

‘It Was the Son’ was part of the London Film Festival’s ‘Official Competition.