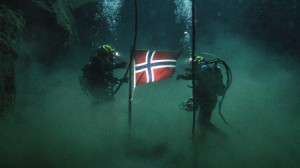 The space race has inspired many a conspiracy thriller over the years, but that seemingly more humble chase, for profits from the North Sea’s wealth of oil and gas resources in the 1970s, remains untapped. Consider that changed: director Erik Skjoldbjærg – best known for his 1997 debut feature Insomnia, the very fine Nordic Noir that Christopher Nolan remade in 2002 with Al Pacino and Robin Williams – has fashioned from real events (with four co-writers) another characteristically serviceable Scandinavian thriller in Pioneer, about the apparently insidious currents that drove the American-funded research and construction efforts leading to the opening of Norway’s oil pipelines in 1981.

Beginning in a pressure tank in which three engineers are simulating the 500m dive required to undergo seabed construction of a pipeline, Pioneer embarks upon an Apollo 13-style template, in which brothers Petter (Aksel Hennie) and Knut (André Eriksen) exchange playful banter over a beer in front of the television before their fateful voyage to the bottom of the sea. This is to be, it seems, a film about friendships tested in and by extreme scenarios. During the mission itself, the semblance to that sub-genre riffing off the lunar landings is magnified by the cross-cutting between Petter and Knut on the front-line and the technicians and scientists at base camp up above, not to mention Petter’s declaration, as he wades onto the seabed, that it’s “one small step for man, one giant leap for an ordinary guy from the projects.”

After the inevitable disaster occurs, however – and following a very tense sequence in which Petter has to swim to air without an oxygen supply, carrying his unconscious brother as he does so – Pioneer switches tracks. When Knut dies in the accident, Petter’s seniors all defer responsibility – even going so far as to implicate Petter. Adamant in his own innocence, Petter begins to investigate, and soon realises that ulterior motives are at work: why can’t anyone give him a straight answer, and why are they so keen to put all responsibility for the accident onto Petter or fellow engineer Jørgen (David A. Jørgensen)? When Petter discovers Jørgen has a history of seizures, he begins to suspect there’s something wrong with the gas used being as an anaesthetic against pressure sickness (which is designed by the Americans who are co-funding the project). Several attempts on his life only deepen the mystery.

Even if we can feel its plot cranking through the motions at points, Pioneer has that typically solid edge we have come to expect from Nordic cinema. Understated for the most part (the odd explosion notwithstanding), the film cranks up a familiar sense of both tension and mystery as it heads to a predictably muddled revelation – who is up to what, and why?