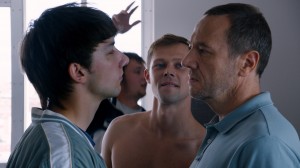 In and around the Gare du Nord Metro station in Paris, young male Eastern European immigrants roam in a pack, killing time, eyeing up commuters, and arousing the suspicions of and taking flight from members of staff. One of them, the youngest, is chased outside by a security guard; clad in a Nike zip-up, he mounts the shoulders of one of the older lads, and the pair of them glare confrontationally back at the guard. Emerging as the group’s apparent leader, the older lad (Danil Vorobyev) swaggers about the train station’s entrance, cockily labouring his steps so that a police car has to stop and let him cross a road; as the car passes, the police officers inside eye him with palpable prejudice.

This, the opening sequence of Eastern Boys – Robin Campillo’s second film as writer-director following 2004’s Les Revenants – establishes the film as a formally masterful work, one that has a considerable feel for observational rhythm, narrative tension and the tonally peculiar. Towards the end of its first sequence, a middle-aged Frenchman named Daniel (Olivier Rabourdin) introduces himself to one of the Eastern European teens. The latter, called Marek (Kirill Emelyanov), reveals he “does everything” – and they arrange to meet at Daniel’s apartment the next day for sex.

But Marek brings the rest of his gang with him, and they enforce/host an impromptu party, at which Daniel is made an effective hostage in his own home. As the sequence effortlessly and engagingly shifts between the menacing to the absurd, the gang systematically empties the place of all furniture and décor, and Daniel wakes up the next morning in an unrecognisably sparse flat. Marek returns – this time alone – and the pair have sex for an agreed-upon exchange of €50. Marek’s frequent visits thereafter gradually lead to an emotional rapport between Daniel and him.

As Marek and Daniel’s relationship develops from the strictly sexual to the filial, an unexpected tenderness begins to take hold, and Rabourdin and Emelyanov’s chemistry has so much nuance that by the time the film turns (suddenly) into a thriller for its final half-hour or so, we care deeply about the fate of these two people – regardless (and as a result) of how they initially met. Campillo draws attention to the film’s strange structure by titling its four unevenly sized chapters, thereby drawing his audience into questioning certain narrative choices. The acting is wholly excellent. As the gang’s sinisterly passive-aggressive Russian leader “Boss”, Borovyev is a particularly compelling standout.