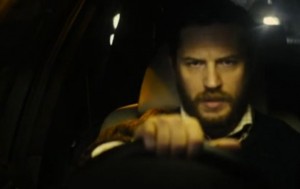 Under the high-pressure strains of contemporary capitalism, work negates family – and then itself. More specifically, in Locke, the daily demands suffered at the top of the construction business beget loneliness and, by extension, infidelity, and the solid foundations on which both a happy marriage with two children and a decade-long job rest are paralleled houses of cards ready to tumble at any moment. Locke, the second film by writer-director Steven Knight to premiere this year – following the underrated Jason Statham vehicle Hummingbird – is a kind of sparse treatment of a high concept, featuring Tom Hardy as the only on-screen character as he heads south down the M6 to London, where the woman with whom he had a one-night stand seven months ago is about to prematurely give birth to his child.

The trouble for Ivan Locke is that he’s meant to be heading home to Katrina (voiced by Ruth Wilson), his wife of 15 years, and his two sons Sean (Bill Milner) and Eddie (Tom Holland), with whom he’s agreed to watch the footie on TV (even his wife’s “wearing the shirt” and “making sausages”, and she’s even bothered to buy him cans of “the German beer” that he likes). Furthermore, Ivan has had to leave the construction site on which he is the dependable foreman, where over 300 metric tonnes of C6 concrete are about to be poured in order to seal the foundations of a 55-storey building. Getting into his BMW and heading southbound, Ivan must negotiate a succession of hands-free phone calls to Donal (Andrew Scott) and Gareth (Ben Daniels; the latter’s character is down in Locke’s phone as “Bastard”), his family and Bethan (Olivia Colman), the 43-year-old loner who’s in labour with the child for whom Ivan’s assuming responsibility.

And that’s it. Hardy’s one-man show could have been written for – and may very well be performed on – the stage, since it relies so heavily on a single actor’s nuanced gravitas to overcome what is essentially a contrived sign-o-the-times allegory laden with some dreadful writerly dialogue and emotional symmetry. Another problem – if the contrivances and symmetries are indeed problems – is that whenever Locke isn’t on the phone, he’s talking to his imaginary (and presumably dead) dad in the back of the car, adding an element of mental instability where a simple confidence in more contemplative and interior moments wouldn’t have been any less compelling.

Refreshingly clocking in at less than 90 minutes, though, Locke never outstays its welcome, and as a narrative experiment it boasts a handsome, singular visual palette of night-time motorway sepias and abstract car-lights. Shifting in and out of focus, Haris Zambarloukos’s cinematography is complemented tremendously by Justine Wright’s editing, which makes much use of the dissolve in order to instil a fluidity in its protagonist’s life.

It’s Hardy’s film, though. In the (amusingly) humourless and literal-thinking eponymous role, the actor performs with a Welsh accent, his idiosyncratic, almost deadpan delivery of lines such as “the traffic is good” or “there’s a speed limit” bringing an intangible torment to proceedings.