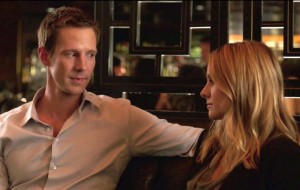 The reunion is something that is often worried about; many times something, which was once popular finishes and comes back years later to just not be as good as it was originally was. Of course there was very little discussion about this happening with Rob Thomas’ film adaptation of his own television crime drama, Veronica Mars, which played between 2004 – 2007. It has been a whirlwind production; from the lowly Kickstarter campaign, which blew up the internet and overnight became a phenomenon – it wasn’t that much of a surprise that fans from around the world wanted to see Kristen Bell and co back on the screen for another adventure, what was surprising was that the studio pulled out of this production and left it to the fans to fund. Did this potentially add a new pressure, which had previously not been seen in filmmaking before now (especially on a production as big as this)? Regardless, it worked and a year later, Thomas and his team can be proud that Veronica Mars was back where she should have been. But does this new, updated version live up to expectations?

As with anything of this sort, there is the danger of alienating any new fans and viewers if they haven’t seen the original series – unlike those in the audience who were Mars enthusiasts, there is the chance that viewers may not understand the quirky relationships between the characters, so how does one get around this? It is a pleasure to see that Thomas and co-scribe, Diane Ruggiero haven’t shied away from their television roots and the film launches straight into what can only be presumed to act as a ‘previously on’. Narrated by Bell (who spent much time doing the same on Gossip Girl), she sums up the television show pretty quickly – centred on the death of a school girl at her high school (played by Amanda Seyfried), the show became so much more, raising debates around the class system and young, independent women. Then after a brief pause, the audience finds themselves with Veronica, today, in her new and improved life.

Veronica Mars has left her time in Neptune, California behind her and has moved to New York with her degrees and spunk – she is 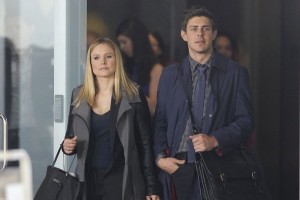 looking for the top job in a law firm when she hears that a girl from her high school, Bonnie DeVille/Carrie Bishop has been murdered and her boyfriend (Veronica’s ex-boyfriend), Logan Echolls (Jason Dohring) was found at the scene of the crime and is the number one suspect. When Logan calls Veronica to come back to Neptune and help him pick an attorney, she never realised that she would once again become embroiled in the dark underbelly of the town she grew up in as she sucked right into the centre of the story and very quickly forgets about helping Logan finding aid and instead becomes his aid in figuring out what really happened the night of Bonnie’s murder.

When she first returns, Thomas does well by his fans from the series and brings back a huge selection of faces; friends and foes of Veronica’s. The murder was well timed as it’s Veronica’s high school reunion and so just the right time to drop in on the place she thought she had left far behind. It is wonderful to see Veronica’s relationship with her father now, how it has grown and matured with her age and how it mirrors everything it once was. The story itself is a great cat and mouse thriller, involving lots of original characters from the show rather than bringing in to many new ones, which is great to see. In particular, Krysten Ritter. who played Gia Goodman in the original series is back and takes centre stage in the mystery. She is a charm to watch, balancing comedy with sarcasm the whole time and becomes a wonderful opposite to Bell’s Veronica, who shines on screen and shows that she truly belongs there. The chemistry between Dohring and Bell is also touching and intimate, their characters have such a great history together and the actors don’t let the audience forget that for one moment. 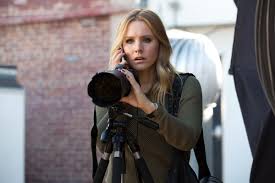 What is so interesting and important about Veronica Mars is the representation of the strong woman and despite everything, there are still so few strong, kick ass women in film (not like those on television really). One has to remember, this was at the height of shows like Buffy The Vampire Slayer, and both Veronica and Buffy are so similar (except for the supernatural aspect). To see a character, who understands her own power and is in command of her own will so completely is wonderful to watch, Bell is brilliant at the centre of the story and commands all the characters around her. What is also not lost from the original series is the dark humour of it all, also like Buffy, there are some really funny moments throughout and everyone involved has near perfect timing in delivering those lines.

A welcome return indeed; the story is tense and the atmosphere is grand. Thomas’ filmmaking was almost made for the big screen, luxuriating in all the colours that his Neptune can offer and wonderfully admiring each of his characters. Veronica Mars proves the reunion can sometimes be great and even open up the story for a new generation of fans. Highly recommended and one of the most exciting films of the year.