Adam Brody was made famous playing the role of Seth Cohen in The O.C, where he made it cool to be a Jewish, bad with girls, good with computer games geek but who knew that ten years later he would be playing a role where he would be travelling around the country to say sorry for his past transgressions with girls; a long list of good looking girls. In actual fact, Some Girl(s) really appear to be written for Brody because his character (only known as Man, according to the IMDB page) could just be gawky but sexy as Seth all these years later. The geek always ends up getting the girl, that is what contemporary television and film always tells us; Juno, Girls and even to an extent Gossip Girl (Lonely Boy was triumphant in the end) because it was a great idea to subvert the stereotype of the jock and the high school prom queen but today it is simply commonplace for the slightly out of place, less muscular and more brain to get the girl; this is why it makes complete and utter sense for Brody’s character to have such a long and colourful history with women.

Some Girl(s) is an adaptation of the 2005 play by Neil LaBute about a man who is preparing to start a new chapter of his life and embark on marriage but after a guilty conscience gets in the way, he decides to travel around the country and meet with his ex-girlfriends and important women from his life and apologise to those whom he didn’t treat very well. The Man is also a writer who has a story published in a national paper about those women who had been in his life, all the women he visits during the film are aware of the writing and their place in the story. LaBute wrote the screeplay for this film, making a few changes to the story and introducing a new woman who wasn’t in the original play. Directed by Daisy von Scherler Mayer, Some Girl(s) has to be one of the most successful exchanges between a man and women to have happened on screen in years, easily understanding and foraging through the tension of LaBute’s slightly idealistic writing and Mayer’s subtle and yet carefully nuanced capturing of the characters most intimate emotions and feelings. The long and the short of it, is that this film is simply brilliant and it doesn’t matter if you are a man or a woman; there is certainly something for you in the same way that 500 Days of Summer was able to balance between romance and anti-romance.

The film is split up into several chapters, within which the audience watch the Man’s conversation with a different woman that he had previously wronged. 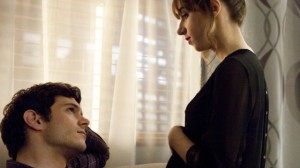 This episodic structure makes the film feel much more personal and intimate for the audience because it allows them to spend a good amount of time with one character without leaving them, really managing to peel beneath the layers and capture their emotions. It also allows the audience time to let their imaginations wander; whilst you watch, you do consider what the relationship between the Man and the woman he is talking to at that point used to be like. The film opens with him talking to Sam (played by House actress, Jennifer Morrison) who turns up at a hotel room slightly dishevelled and annoyed that she has been called out of the blue to talk. What seems most interesting between these two is that they perfectly sum up the emotions of teenagers growing up in love; they were going to go to Prom together and yet that never happened because the Man ripped Sam’s heart out and dumped her. Whilst she now has a loving husband and family, it seems that she has never been able to let the anger and pain quite leave her and finally she is being given the opportunity for closure. LaBute’s writing is so sincere and clever that none of his characters hide their true feelings. Whilst the audience really want to feel sorry for the Man and be part of his journey, he always manages to say things that are simply so awkward and rude even though he doesn’t really mean them to come out as such. He tells Sam that he left her because he could see her leading a normal and boring life; he didn’t want that. Morrison is really wonderful because she manages to be angry and hilarious at the same time; something which requires a lot of skill to properly balance. 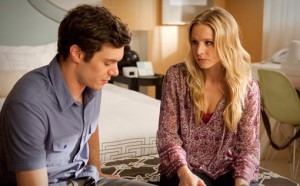 The second chapter is probably the least interesting and engrossing in the film, where he goes to visit Tyler (Mia Maestro) in a much more intimate setting. The blinds are closed and the room is much more romantic; this is one of the feats of the film – Mayer has created settings and locations, which say as much about the women we are visiting as their dialogue themselves. Their conversation is pretty standard and she doesn’t hate or miss him – instead their conversation is played for laughs at the sexual experimentation they once were part off. She makes a move on him and he doesn’t seem to be able to resist. The third woman is possibly the most interesting and powerful; Lindsay played by the British actress Emily Watson is an older woman who worked at the college that the Man worked. Her husband was his boss and he repaid this early job opportunity by having an affair with his wife. Watson speaks tenderly and lovingly about the time they spent together, the future they could have had and how exciting it was to keep the secret but when he ran away and left without saying anything, she was left to pick up the pieces. The sexual tension between Brody and Watson is incredible, making the conversation heated and very sensual. Her acting is so extraordinary in this sequence that the rest of the film really does fall away. The audience are so completely wrapped up in the picture she has made that she crashes everything when she tells the Man her husband is outside. She wants to persuade him to cheat again with her so that he has to walk around with the secret and hide it from his future wife. She seduces him and exudes sex appeal the entire time she is on screen.

The next girl is new to the film, Reggie played by Zoe Kazan. She is the younger sister of the Man’s childhood best friend, whom he hasn’t seen in 15 years. She was around 11 when she knew the Man but they always had feelings for each other. Except she suddenly uses this opportunity to reveal to him that she lost her childhood the day they kissed and she discovered her sexuality. She moves from eroticism to irrationality and then hysteria all in a very short space of time; really showing off the power of Kazan’s acting and how wonderful she is on screen. Reggie is a full stop in the film, where for the second time (after Lindsay) you see how the Man’s troubles with women have actually affected their lives with longer lasting effects. She wants closure, for which the Man is happy to provide but he wants to ensure he can get away scott free from the conversation. That is always the dark undercurrent of the film, whilst it is light and funny in the most part, there is always a feeling that this man just runs away from things when they get tough; he never confronts the issue and whilst the film does try its hardest to force him to, it never quite manages to pull all the way through.

Lastly, he visits Bobbi (Veronica Mars’ Kristen Bell) who, much like Watson, works extremely well on screen with Brody. Initially their conversation is 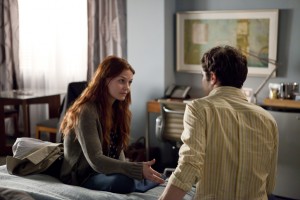 about the fact that the Man used to dream about being with Bobbi’s twin sister. He admits this and she becomes uncomfortable with the situation. The last episode of the film is the most revealing for the Man and for the first time ever, you see actual remorse as oppose to the act he had on for the rest of the film with the rest of the women. Their conversation takes many twists and turns and Bobbi plays with him as much as possible, going so far as to persuade him that her sister had died of cancer. But despite the revelations, the Man never quite manages to live up to the ideal he has going on in his head and despite trying to find rest bite in his journey, it nevertheless ends up in a big mindfuck.

Some Girl(s) is funny, smooth and simply wonderful; a date movie that you would be proud to suggest. The performances are mostly brilliant and this really does show off Brody as a talent to watch out for because he really can make geeks very sexy.

You can purchase Some Girl(s) on Vimeo on Demand now: http://vimeo.com/ondemand/somegirls