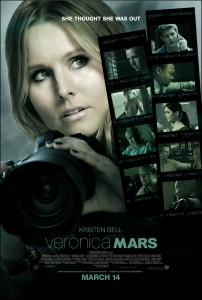 The “Veronica Mars” movie was made possible by a record-breaking Kickstarter campaign driven by fans of the television show, which ran from 2004 – 2007. Launched by series creator Thomas and series star Kristen Bell, the Kickstarter campaign unleashed an unprecedented level of fan enthusiasm and support, reaching the project goal of $2 million in just 10 hours. At the end of the 31-day campaign, fans contributed $5.7 million, making Veronica Mars the number one funded project in the film category and the third-highest funded project in Kickstarter history. It is the most widely supported Kickstarter campaign to date with more than 91,000 backers worldwide, who have remained engaged throughout production with frequent behind-the-scenes updates from Thomas and the film’s cast and crew.

Added Thomas, “I was totally taken off guard by the amount of international support we received during out Kickstarter drive. A movie of this scope wouldn’t have been possible without our international fans. I’m incredibly excited that fans around the world will be able to see the movie on the same day that it’s released here in the U.S.”

Fans of the show and the upcoming film can follow its progress, see cast and filmmaker diaries, exclusive content and release information by following the film’s social media presence, including:

Fans can also get information about the film by following Rob Thomas on Twitter at @RobThomas.

The screenplay for “Veronica Mars” is written by Thomas & Diane Ruggiero from a story by Thomas. The film is produced by Thomas, Dan Etheridge and Danielle Stokdyk. Joel Silver, Kristen Bell and Jennifer Hinkey are serving as executive producers.

“Veronica Mars” will be showing at the following cinemas in the UK from 14th March:  Empire Cinemas – Leicester Square (London), Birmingham and Newcastle, Showcase Cinemas – Dartford (London), Glasgow, Manchester, Cardiff, Bristol, Leeds and Nottingham and in Ireland at the Movies@Dundrum cinema in Dublin.

“Veronica Mars” will be released on Blu-ray and DVD later in the year.

Veronica Mars (Kristen Bell) has put Neptune and her amateur sleuthing days behind her on the eve of graduating law school. While interviewing at high-end law firms, Veronica gets a call from her ex-boyfriend Logan (Jason Dohring) who has been accused of murder. Veronica heads back to Neptune just to help Logan find an attorney, but when things don’t seem right with how Logan’s case is perceived and handled, Veronica finds herself being pulled back into a life she thought she had left behind.