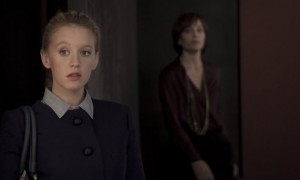 Despite the fact that Alain Corneau’s Love Crime (Crime D’Armour) was originally released two years ago in France, the UK are only just seeing Corneau’s last film before his death in 2010 now. There are many reasons, I assume that this film may have been sitting on the shelf before it’s release here (it was sporadically released through the US at the end of last year), but I imagine the reason that it is coming out now is before Brian De Palma’s American re-make Passion starring Rachel McAdams and Noomi Rapace comes out next year.

I just have to say, it is shame we have had to wait so long because Love Crime is one of the most enjoyable French thrillers I have seen, perhaps since 2006’s Tell No One (also starring Kristin Scott Thomas). Although it may not be everyone’s taste, and yes, it adheres to many of the structural stereotypes that we hold dear to the noir thriller, I don’t think that is something we can hold against the film. Love Crime is well acted, well thought out and although it doesn’t really surprise, I was captivated throughout because what really pushes the buttons of this film is the characters.

Love Crime tells the story of Christine (the always brilliant Kristin Scott Thomas) who is the boss of a department in a multinational company, the majority of her staff are male but one women catches her attention, the intelligent Isabelle (Ludivine Sagnier). They work together on a proposal for a client in Cairo but Isabelle comes up with the one element that will surely win them the account. When Christine takes credit for the idea, Isabelle starts to see another side of Christine; a manipulative and vindictive side, which shows that she will take what she wants. Taking a leaf out of Christine’s book, Isabelle starts an affair with one of Christine’s boyfriends, the handsome Philippe (Patrick Mille) and becomes embroiled in a cat and mouse game with Christine where the women try to outwit and dominate the other in all aspects of their lives.

One of the more obvious aspects of this film, which is played up throughout all the promotion for the film 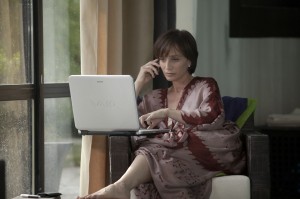 is the lesbian undertones between the two women. The film opens with them discussing their presentation, when Christine slowly moves towards Isabelle and smells her neck. This seduction is all part of the game that they play throughout the film and Thomas is just brilliant at showing her erotic darkness throughout the film. It is so interesting to me, that in much of cinema, the lesbian is represented with a sense of evil and horror – this is no different. It is almost as if the sense of the foreign, and the exotic is given the chance to represent all the opposite ideals to those, which society holds true. At three moments during the film, Christine completely dominates Isabelle superficially; at first she gives her, her scarf, which holds deeper significance by the end of the film, she asks Isabelle to put her hair down and then up again because she feels it looks better up and finally, during a very interesting scene in the car, they both use Christine’s lipstick one after the other, as Christine suggests it will bring out the colour of Isabelle’s eyes. This double entendre was somewhat brilliant, first Christine’s control over Isabelle’s look but also the fact she dominates the phallic imagery of the scene and tells Isabelle to use it near her mouth before using it herself. 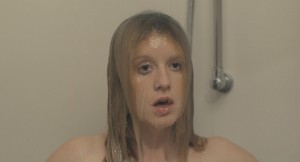 fighting over men (Glenn Close comes to mind in Fatal Attraction) but instead the women are fighting over their jobs; they want to prove they can go further in their careers. This is such an interesting take on the genre, which has recently grown stale, and Corneau has managed successfully to renew it. Theperverse game of seduction continues until breaking point, and something happens, which neither of the women will return back from. Another small indulgence for the film geeks amongst us (please raise your hands) are the slight references to other thrillers and women’s tragedies throughout past cinema, including De Palma’s own Carrie (see picture).

What is so interesting as well is that Corneau is not worried about mixing sophistication with pulp and although there are moments of visual vulgarity, both the main actresses continue throughout the uphold their classiness and complete awareness that they are in control of the audience.

Performance wise, yet again, Kristin Scott Thomas shines as the manipulative and bitchy Christine. She is physically scary on screen, and holds her look at the audience so severely that ultimately you don’t want to look at anything else. She goes from strength to strength in her French cinema roles proving that even in a different language, she is still one of the most talented actresses we have today. This was the first role that I have seen Ludivine Sagnier in, and she also has an outstanding grasp over holding the audience throughout the film. Although for the first half of the film, the audience is led to side with her and empathise with her treatment at work, by the end of the film, we understand her true terror and that really she was more manipulative that Christine. This is particularly embodied during the final sequence where she walks into the office, more controlled than ever before, mimicking Christine, down to the colour of her lipstick and the words that she says. 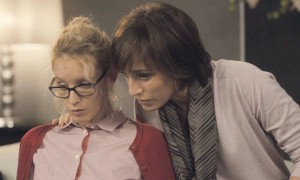 Another aspect of the thriller, which Love Crime, lovingly (mind the pun) fulfils is its choice of music. In this instance, there is a chillingly dangerous jazz score, which hooks around each scene and pulls the audience closer towards the characters. It’s both foreshadowing of the crime scene and darkness that surrounds the film but also is highly seductive and connotes the highly sexualised atmosphere, which the characters live within.

Love Crime is a clever, cool and sexy French thriller, which grabs hold of the audience from the very first scene and continues to compel till the final, revelatory sequence.