In The House DVD Review 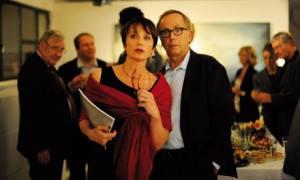 François Ozon returns with Dans la maison (In The House), which is one of the most sophisticated and shattering pieces of recent French cinema. Everything seems to just work together in sync; the intelligent narrative, alongside the beautifully written script, wonderful set pieces with great direction and a cast who so fully throw themselves into the story that each and every one shines. There is a good deal to consider when looking at In The House, especially when one has to decide whether they are watching a dark psychological drama or a black comedy because the film can be interpreted as both – with very different outcomes. Ozon’s skill in his craft is shown in that however you decide to interpret the film, neither one is better than the other and instead allows the audience to appreciate and interpret the film at their own will without being led directly down one specific path.

Germain (Fabrice Luchini, who has incredible comic and dramatic timing) is a literature teacher; fed up with bureaucracy and the crazy political agendas of those running the school, he is much more interested in just making sure the students are given the time and attention they need – he believes he is an old school style teacher. One of the students on his class, Claude (a creepy Ernst Umhauer) starts to write stories for his teacher about his time in the house of a friend of his, Rapha, whose mother (the beautiful, Emmanuelle Seigner) is very clearly lonely and bored. Claude feels he has a special affiliation with the woman and wants to save her from the inevitableness of life. Claude’s skill of writing captures Germain’s attention and he shows each part of the story to his wife, Jeanne (an astonishingly brilliant Kristin Scott Thomas) who becomes more aware as time goes on that these stories are a form of manipulation and deception. None of the characters realise that these stories will hurt each and every single person, showing that sometimes the imagination can go a lot deeper than just a fantasy.

One of the majorly strong points of In The House is the sheer acting talent of the entire cast; Kristin Scott Thomas outdoes everything she has 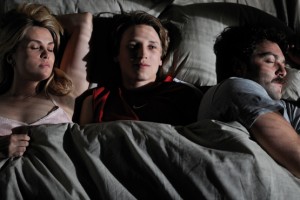 done before as a subtle suburban wife who works at an art gallery. Whilst she wants to keep up with the trends, there is the inevitability that one gets old and starts to lose touch – she is the perfect reflection of this. Claude’s stories disturb her but it may be because he is shining a mirror much closer to home than she appreciates. Thomas’ French speaking roles have given her career the biggest lease of life and In The House is one of her best roles to date. In particular, in the explosive finale between her and Germain, she portrays so much emotion because everything that she believes has betrayed her and she has changed her mind when it comes to Claude.

Luchini manages to blur the lines between great drama and a hysterically challenging role in his portrayal of a down and out teacher. He has lost his excitement for the role and finds himself stuck in a rut, both in his career and his marriage and yet when he meets this mysterious and challenging young boy, Claude, everything seems to change for him. He very clearly sees himself in the boy and wants to utilise the talent he is showing; what he doesn’t realise is that he is being manipulated along every step. Luchini is hilarious though, and offers many light moments when he is talking about the family in the stories. His chemistry with Thomas is also wonderful to watch because they both subtly navigate around the typical gender roles in a stereotypical relationship. 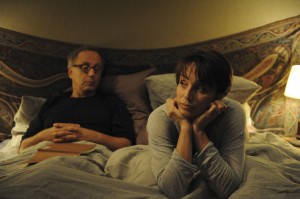 Then comes Umhauer who portrays the odd young student, Claude. Claude wants a relationship with this older woman and whilst the scenario could have turned very The Graduate, it actually remains with the young teenager to control the situation. Through his stories he manipulates those around him and manages to get Germain to get him an upcoming maths test to ensure he continues tutoring Rapha, to make sure that he stays in the house. Umhauer has a striking face with stunning features and recalls a young Ezra Miller (Afterschool, We Need to Talk About Kevin), who says very little and yet portrays intense emotion through his eyes, which are captivating throughout.

One of the standout techniques that Ozon utilises in In The House is his use of fantasy and the surreal; he blurs the boundaries consistently throughout the film, allowing the audience a direct entrance into the minds of the characters. In particular one sequence when Claude kisses Esther, the lonely wife, Germain appears and questions the scene. The audience is made aware that he is reading something Claude has given him, but breaks the 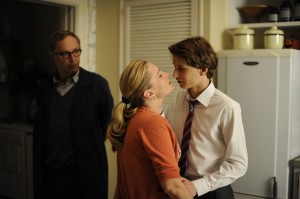 fantasy by appearing and demanding to know the consequences of this part of the story. These scenes appear throughout the film; they do a brilliant job of pausing the narrative and allowing the audience to see the internalised emotions of the characters because there is so much importance on what is not said but instead on what is seen and the silences of the in between.

In The House is a beautifully, incredibly gripping film about what happens when everyone around you realises you are being manipulated and despite warnings, you sink deeper into the deception. Daring, bold and extraordinary, Ozon’s film proves that French cinema is still one of the best national cinemas in the world.