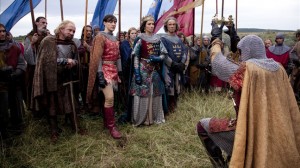 I’ll open up this review with a small exploration of costume making. It’s all very well researching what people wore in a certain period, and to recreate them for a film, but the costumes need to look like people actually wore them. There is a process that goes into this called ‘breaking down’, and when it’s done well you get something like Lord of the Rings, where in spite of the fantasy setting everything feels authentic and lived in. Breaking down is particularly essential for historical dramas as the lack of commercial culture meant people wore and worked in the same clothes a lot of the time, and didn’t have things like washing machines. When breaking down is done badly, everything looks like a school fancy dress day.

World Without End has some of the worst breaking down of recent memory. It’s like an am-dram production have decided to recreate Game of Thrones at a nearby open air museum using costumes that were deemed too unrealistic for the BBC version of Robin Hood. Now this in itself doesn’t make a television series bad, but combine this with the cheap looking sets and props, and the whole thing just seems so bright and fake that it’s an immediately jarring barrier to the story.

This sense of fakery is further exacerbated by a group of actors so hammy you could shave bits of bacon off them. Every character is either a righteous hero or ridiculously snarling villain; the middle ground perhaps lost in the editing room. There are three central villains: Ralph (played by Oliver Jackson-Cohen who is ok) and then the utterly ridiculous mother and son combination of Petranilla and Gowdyn. She lives vicariously through her son, who is demented in every way and eventually becomes a bishop. Cynthia Nixon and Rupert Evans play this nefarious pair as if they are straight out of GCSE acting school, spitting every line, rolling their eyes and screaming outrageously to try and make the paper thin characterisation dramatic. At least these two are ridiculously evil enough to truly hate, whereas the leads – Charlotte Riley and Tom Weston-Jones as oft frustrated lovers – are just entirely bland. They are also too prep-school good looking to convince, especially as they remain so during a series of battles and plagues. The only actors that come out with any dignity are Ben Chaplin as a mysterious monk and Blake Ritson as the King, who manages to be admirably conflicted in a series otherwise devoid of nuance.

This central core of characters, as well as a clutch of hilariously wooden supporting players, populate a story that is part soapy relationship drama, part history re-imagining, part uprising against oppression, all rubbish. There are some completely arbitrary developments, such as Caris sharing a quiet lesbian moment one episode (never revisited again), and the main plot chugs along with such a disregard for killing off characters that it becomes amusing. Everyone’s getting hanged or disembowelled or dying of the plague, and you can guess who will survive until the last episode simply by whoever makes it on the front cover of the DVD. It rushes so quickly between deaths and plot developments that every new revelation (she’s his mother! He’s not who he seems! He’s being even more dastardly!) becomes somewhat meaningless, no matter how much the cast try to make it seem dramatic with exaggerated glances and villainous grins.

There’s also a distressing amount of sexual violence, which seems to be in every episode, presumably as it’s the quickest way to show that everyone is an absolute rotter. Pretty much every female character gets molested or raped at some point over the eight episodes, and whilst it does serve to make the villains even more loathsome, you’ve got to wonder whether everyone in the 14th century was a pervert. It’s representative of the series as a whole, nastily over the top to the extent that after a while (well, around two episodes) it becomes incredibly difficult to care.