Set Fire To The Stars Review 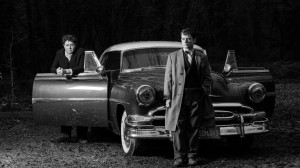 An intimate and beautifully created snapshot, Set Fire To The Stars tells the story of Welsh poet, Dylan Thomas and his first trip to America during the 1950s. Seen through the eyes of scholar and fellow poet, John M. Brinnin (Elijah Wood), who tries his hardest to not only save the life of the man who has inspired him but in turn to force him to understand and save himself. The real life Brinnin, a university lecturer had a fascination and love for Thomas’ work and persuaded his board of governors to allow him to bring Thomas for a tour of universities around the USA; if he can show the American people Thomas’ work, he may in turn help Thomas recognise the true power of his words.

Dylan Thomas, played by the extraordinary Celyn Jones, who also co-wrote the script to the film, is a giant beast of a man. Powerful and mighty but also timid and afraid. Jones and director, Andy Goddard, portray Thomas as a fragile monster. Parties, booze, food, women and swearing are mixed together with a distinct sense of pity and paranoia, scared of the world around him and always unsure of his own work. He trembles in the face of a society that may judge him and behind the bravado and loud mouthed words is a sensitive and emotional man.

Brinnin brings Thomas to the States for the first time in the poets career; they connect and Brinnin quickly becomes his 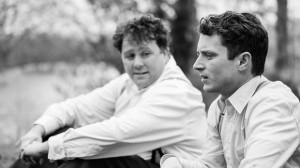 confidant and companion on the road. The chemistry between Wood and Jones is stellar, carefully treading between a kind of kinship not unlike lovers. The film carefully balances a sort of homosocial atmosphere with two very different men who are trying to work out their own places in the world. The two bounce off of one another; trusting each other as the film goes on. For both actors, they put a lot of faith into each other – it is no easy feat portraying this relationship where it seems awfully one sided but in fact both are getting something from it.

Going from party to party, Thomas makes a drunken fool of himself and forces Brinnin to take him out of the city and to an old family cabin where he feels Thomas can concentrate and get ready for his next reading on his tour. But this only further hinders the situation; nothing is going to change and just when Brinnin thinks things are getting better, Thomas once again lets him down. In a stand out sequence, old family friends, Shirley (Shirley Henderson) and Stanley (Kevin Eldon) come round and spend the night drinking, fighting and telling horror stories. Between Shirley and Dylan, they push Brinnin to the edge and he soon realises it is going to take something major to bring him back. 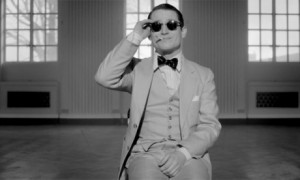 Goddard’s film is never judgemental over Thomas and his issues but it also doesn’t suggest that a solution could be found – the story he is telling is clear and simple. This film is looking at the beautiful, powerful and poetic nature of Thomas but that also can be what is most destructive. Early on in the film, a letter is sent to Thomas from his wife, Caitlin (Kelly Reilly) but he is quick to throw this aside and ignore its contents. Gradually Brinnin gets him to open the letter and a touching sequence between Dylan and a daydreamed version of his wife telling him how her life really is, is played out on screen.

When you already feel the story has been told before, a film like Set Fire To The Stars comes along and renews it for a new generation. Compelling, emotional, touching and filled with wonder, Goddard’s film is one of the best and brightest to tell this story. Filled with lashings of stunning imagery and poetic both in action and script, Set Fire To The Stars will stay with you longer after the credits have rolled.