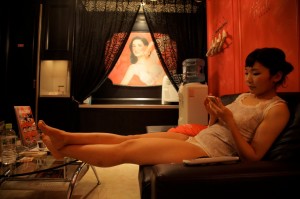 The doors to Japan’s deeply closeted sexual society are teased open in Phil Cox & Hikaru Toda’s documentary Love Hotel as a crudely compiled intro condensing japan’s entire sexual history into a couple of japanese erotic woodblock paintings of secret love nests gives way to what is purportedly the modern day equivalent, the love hotel. A montage of semi-obscured, neon-lit coital moments introduce the viewer to The Angelo, one of Japan’s 37,000 love hotels, rooms where the primary purpose is not to sleep, but to escape. Escape from the country’s guarded attitudes towards sex and dating, from the demands of a high pressure worklife, and from the crushing presence of self. Love hotels are a place “where you can get outside of yourself” explains one patron.

“Our society teaches us from a young age that expressing our thoughts and desires is not appropropriate or proper” reveals pro dominatrix Kira, introduced early on. In Cox’s & Toda’s vision of Japanese sexual society, the love hotel is a safe space, somewhere where visitors can travel (both geographically and psychologically) to a zone free of judgement and traditional societal codes. “Japanese people are in need of escaping reality, they need refuge in a place like this” says a manager of one of the hotels, and it seems so, as an infographic soon explains. These sorts of resting rooms receive 2.8 million visitors per day – a mix of existing couples ‘keeping the passion alive’, new couples consummating their relationship old one breaching it extra-maritally, and solo visitors seeking privacy or paid company.

Given the invasion of privacy on display here by default, there is potential for the film to become distasteful, but Cox & Toda cut away mostly at the right time – generally as the pants drop, or the whip comes out. The subject matter demands a degree of titillation, but it doesn’t feel perverse. Indeed, for the most part, the sense of voyeurism comes from points of emotional intensity rather than the sexy parts. Often the viewer is made privy to post-coital pillow talk. This sort of talk is so personal it almost feels more invasive than being partisan to the proceeding act itself (which we are too, for a few seconds – lest the filmmakers and their audience be granted immunity of all voyeuristic desires). While true that the majority of the film consists of behind the doors footage of love hotel patrons (something that should see it receive a fair amount of attention), to suggest that the film was all about watching people do it would be misleading. The majority of the footage surrounds all the moments that come before and after the act. The lead in and the consequence of sex is what we don’t usually see. Footage of the act itself is widely recorded.

What ties these scenes though, is never truly explored. Cox and Toda talk loosely of a Japan divided, love hotels as an outlet for the inhibited, and a place of escape for a country in crisis, the point is never quite reached. Intermittent radio recordings of news broadcasts revealing tightening restrictions on the government regulations by which the hotels can be ran place the hotels within a wider national narrative, one of economic crisis, and of increasing conservatism and confusion, but its not completely fully formed. The love hotel industry is at threat from Japan’s ‘entertainment police’ we learn, and its necessity its not just for leisure-seekers. A gay couple profiled require the institution to enact their desires  in a society where implicit homosexual displays are not accepted. Mostly though, the wider role of the love hotel in Japanese society is sidelined for a more personal portrait of a cross-section of its users. Hearing a maid complain that ‘japan is such a mess that no one wants to have babies anymore’ whilst cleaning up condom wrappers is good combination of image and sound, but not quite the sum of a coherent argument.

Quite why the couples let the filmmakers into their most private of moments is hard to understand, but kudos to the Cox and Toda for getting that access. It is hard to tell how much, if any, of the footage is staged, but the degree to which some couples act with a complete lack of inhibition suggests it was filmed either with an unobtrusive or hidden camera setup, or with the time gained trust of the participants. it is hard to imagine some of these couples going through the conversations they do with a filmmaker with a DSLR and steady-cam rig in the room.

Much more than the expected hour or so of empty, if entertaining, eroticism, Love Hotelhas an unexpected frequency of moments both comedic and moving. While cutaways like a receptionist delivering a capsule containing underwear to clientele via a suction tube delivery system deliver on the expected quirk, the degree of access achieved to moments usually conducted entirely in private is the main interest of the film. “We are so clumsy with love” says Rika early on, stumbling upon poetry herself. The feeling that we shouldn’t be here comes not from seeing Japan’s naughty bits, but from overhearing the conversations that only usually only happened between partners who believe no one else can hear.

Dochouse will bring Love Hotel to the ICA on the 17th September with directors Cox and Toda present for a Q+A. Book tickets here.