Win Travis Mathews I WANT YOUR LOVE on DVD 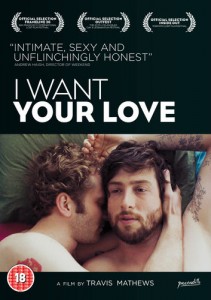 The hotly anticipated debut feature film from director Travis Mathews (INTERIOR. LEATHER BAR) is a bold and unflinching look at gay relationships among a group of San Francisco friends including scenes of real sex, striking controversy amongst global film censors, including Australia, where the film was banned.

After a decade of living in San Francisco, Jesse is forced to move back to his Midwestern roots because he can no longer afford the city. On his final night in the city, friends and ex-lovers gather for a going away party that promises to heighten Jesse’s already bittersweet feelings about leaving.

Featuring music from The Chromatics, I Want Your Love is a passionate and deeply intimate film, that dares to capture the uncensored zeitgeist of modern-day San Francisco unlike any film before it

“I Want Your Love is an intense, intimate film with a fantastic soundtrack and stunning visual beauty that will haunt you long after the final scene.” – Scott Heim author of “Mysterious Skin”

“Intimate, sexy and unflinchingly honest, I Want Your Love is a bold film with rare insight into the uncensored lives of a generation of gay men” – Andrew Haigh, Director of Weekend

Travis Mathews worked with who on his next feature, INTERIOR. LEATHER BAR?