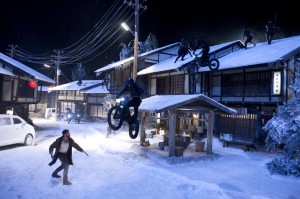 With his sixth portrayal of the character proving only marginally less lacklustre and unnecessary than the last, Hugh Jackman’s perpetual attachment to Wolverine seems misplaced, if somewhat charming. (It’s not just about the money?) This reverence, as well as many other things, do not translate all that well in James Mangold’s latest Wolverine interpretation.

With Mangold as director (having taken over after original helmer Darren Aronofsky pulled out), and a popular Japan-set, Frank Miller-penned comic as the source material, expectation for this new outing was higher than it perhaps should have been. Reaction to Jackman’s last time spent wearing claws, the fairly disastrous X-Men Origins: Wolverine, may have tempered anticipation for another day out with Logan, but he is always a character that audiences will have an appetite for. Despite this, he hasn’t been done justice yet and despite some good intentions, Mangold’s version is no different.

Beginning with a nuclear explosion, and attempting to build from there, Mangold’s The Wolverine is overstuffed and convoluted in a way that comic book films had made strides to get past by this point. In this outing, a bearded, cave-dwelling, friend-only-of-the-bears Logan heads to Japan after he receives a dying request from a Japanese pal he saved during that opening explosion, and in doing so, finds himself vulnerable to injury as well as a good degree of cultural dissociation. Luckily, two cute Japanese girls are there to show him around. A quirky one who fights,  Rila Fukushima, and a waify one, Tao Okamoto, who waits to be seduced whilst Logan dreams guiltily of Jean Grey (who he acci-murdered a few films back in his sleep.) That description cuts a selectively cut slice of the dramatic content of the film, but in terms of tone, humour and level of plot complication an even shorter summary describes things better.The Wolverine is more X-Men 3 than X Men: The Last Stand.

Filled to the brim with ninjas, robots and motorbikes, The Wolverine feels ridiculous without any of the twofold entertainment/amusement value that comes with a degree of awareness of it. Joss Whedon’s Avengers film for instance was light and knowingly funny, Mangold’s Wolverine appears to have absolutely no idea that its not the brooding, psychological take on the character it think it is, but a surprisingly dull comic book movie made up of everything the West associates with Japan.  Comic book films don’t have to brood like Nolan’s Batman films or pun like Whedon’s Avengers one, but they need to know what they want to do, and in this one Mangold is really just throwing things and hoping they stick. The Wolverine is neither straight nor silly, its something worse, a film that think it is both serious and funny, and is mostly neither.

Consistently stupid would have been fine. In one enjoyably goofy scene, Jackman and an adversary fight on top of a bullet train, anchoring themselves with knives and claws between hyper-accentuated 40ft obstacle dodging jumps. A 300km per hour twist upon the standard train-top battle that at least elicited laughs. Unfortunately, it is the unknowing dramatic climax of the film, and it comes barely a third of the way in. After that, the audience is stuck with ponderous existential exasperating (does Logan want mortality, can Logan love again etc.), the kind of moronic one liners that should have died with I’M THE JUGGERNAUT BITCH, an underutilised villain (Svetlana Khodchenkov as Viper) and a anti-climatic bore of a final battle with a giant-robot-samurai (what?!).

Jackman’s Wolverine, is a personification of a character than seems so set in stone, from the beard and hairline side tufts to the number of gratuitous shirtless scenes – tenuous explanations for which include in this iteration: surgical procedures, tree cutting tanning time and atomic bomb incineration – an alternate take seems difficult to picture. Perhaps though, if the character is to continue to be dragged out, it is time for one. While the body remains taut and fierce, Jackman’s mind seems a little wearied, his take upon the character feeling like it hasn’t progressed since X-Men, all the way back in 2000.

Comic book films (and audiences) have moved on since then, but Jackman and Mangold haven’t, assuring audiences before the film that Jackman’s body is suitably real, and frequently bared. Perhaps they should have just confirmed that its not quite as bad as Origins, as that is all fans will need to hear.