Love Is All You Need Review
Home
Reviews

Love Is All You Need Review 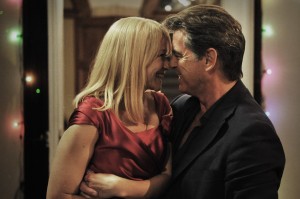 Sometimes you just want to go to the cinema and see a really lovely film, which will make you laugh throughout and smile by the end; if you happen to remember anything from the film afterwards, then that is always a plus. Love Is All You Need is one of these special occurrences, expertly directed by Susanne Bier and lead by Pierce Brosnan, in the best performance I have ever seen from him, and Trine Dyrholm as a couple who meet in the oddest of situations and despite all circumstances, they just make it work.

As well as the storyline and the casting, Bier has filmed in the most luscious and visceral of locations, in Southern Italy. She has clearly taken pride and time in ensuring that she treats Italy with the respect that it deserves on screen, and instead of bumbling Italian waiters and busy city centres, has taken the characters to the outermost edges, into the stunning countryside where they are surrounded by nature and true beauty.

Love Is All You Need follows a hairdresser, Ida (the delectable Dyrholm) who has just completed her cancer treatment, but is aware that the treatment may 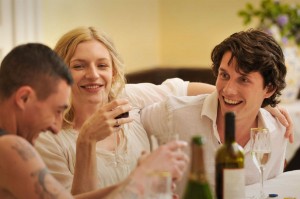 not have worked and that the cancer could always return. She leads a fine life, getting on with her days and doesn’t complain about the apparent mundaness of it all. That is until one day when she comes home to find her husband, Leif (Kim Bodnia), having it off with his young secretary on their sofa. The timing of the revelation sequence  is something quite special, as the audience aren’t really sure whether to gasp at the drama or laugh at the embarrassment of all the characters involved. Neither Leif, nor Ida or the young woman are really sure what to say or how to react, so instead Leif’s bit on the side just excuses herself and leaves. Then ensues a wonderful conversation where Ida confronts her husband, but he blames her for not staying out as long as she had planned. Her character initially seems quite timid, and she appears as the doting wife who will snap to anything her husband wants her to do. That is until she kicks him out…

All the while, plans are being made in Italy for the marriage of Ida and Leif’s daughter, Astrid (the truly angelic Molly Blixt Egelind) to Patrick (the handsome Sebastian Jessen), who is the son of fresh food mogul, Philip (Brosnan). The plan is for Astrid and Patrick to return to Philip’s house on their lemon plantation a few days before the wedding to get the house ready before inviting the rest of their crazy families to come and stay with them and take part in their truly romantic dream wedding. All we need is a little music at this point and we are on the way to the slightly more cultured sequel to Mamma Mia, but alas, this is far from the case and Love Is All You Need is in another class of filmmaking altogether. 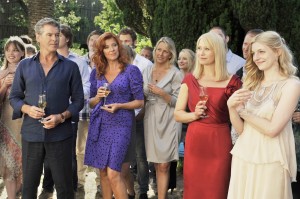 Ida decides she is going to travel from Denmark to Italy alone for the wedding, but we soon realise this is probably the first thing she has done without a man in a long time and so ensues one of the funniest and most uncomfortable sequences in the film, where Ida and Philip literally crash into each other (in the airport car park). Philip is so bewildered by this wild, crying woman that he just walks away and leaves her to sort out the issue, even though they realise that they are both going to the same wedding (how the parents of the bride and groom had never met before is a little beyond me, but you do have to suspend you disbelief for this film to work). All you need to add now is a flirty Italian workman, Leif bringing his younger woman along and Philip’s over bearing and madly in love sister in law, Benedikte (played by the hilarious Paprika Steen) and you have a winning formula for one of the most original and memorable romantic comedies in a long time.

What sets Love Is All You Need apart from the rest is that along with the light hearted and gushy moments, there are genuine moments of drama, tension 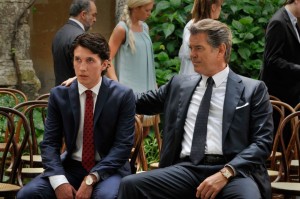 and contention amongst the characters. There are real story lines going on, which will genuinely affect the direction in, which the story is going. Take for example Ida’s cancer diagnosis – she is in fact a very scared woman, who is getting used to life after cancer treatment, but things are very different. She has to wear a wig because she has lost her hair, and Bier is very careful to place emphasis on this delicate detail, without it overbearing the story but also not underwhelming either. Another dramatic storyline is to do with Philip’s family history; the reason he hasn’t returned back to the house in Italy for so long is because it reminds him of his dead wife and his relationship with his son is also fraught because he reminds his father of her. The subtle moments when Philip and Patrick sit together and talk about their pasts are some of the most interesting and touching, because what they are saying is something, I am sure, so many of the audience will be able to relate to. The film sets the powerful and very serious Philip up for a (comical) fall from the very start, because he is forced to look back at feelings, which he has shut away from a very long time and it is only after confronting his past, that he is going to be able to put together a fulfilling and exciting future. 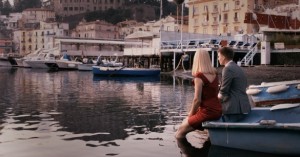 I would just like to take a moment to consider the performances in Love Is All You Need, because Bier has created a cast dynamic, which works so well both in terms of comic timing but also being emotionally compelling enough to make the love story believable and affecting. As an audience member you get drawn up into the wonder and magic of it all and every scene between Brosnan and Dyrholm, just electrifies the screen; their chemistry seems so raw and real, that even though they fall in love in such a short period of time, you really feel it. The other older members of the cast are just as fun to watch; Bodnia as Leif is dopey and unaware of the damage he is causing around him, which is why he works so well with his younger woman who appears just as stupid. But honestly, Steen is something brilliant; she flirts with her brother in law for practically the entire film, doting over him and boosting his ego at any point necessary, pointing out how wonderful and generous he is for lending the house to the wedding, but she also appears to take it too far, providing moments of both embarrassment and drama as she comes across pretty sinister at times both in her relationship to Philip and her attitudes as a parent. For me the only weaknesses were the two younger actors, Egelind and Jessen, but not because of their performances per se and probably more because they weren’t particularly important in the great scheme of the film and as the film went on, you recognised that they were mainly plot devices to cause their parents to meet.

All in all, Love Is All You Need, is a fun packed, sunny smash, which leaves you with a magical, tingling sensation once you have finished. It’s beautifully shot, delicately written and balances romance with drama perfectly. The actors are all brilliant to watch, in particular Brosnan and Dyrholm, who steal the show with their love story, which the audience are cheering on from the moment they meet.