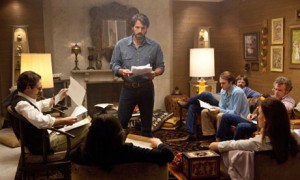 Says John Chambers, Hollywood special effects veteran: “So you want to come to Hollywood, act like a big shot without doing anything? You’ll fit right in.” As a film that takes its name from another movie, whose production is faked in order to provide elaborate cover for a dangerous international hostage-retrieval mission, Argo enjoys multiple such digs at the industry while priming us as to its own ulterior trappings.

A heist movie at heart – in-movie jargon prefers “exfil”, as in exflitration – the film is based on an actual incident in 1979, when the American Embassy in Tehran was seized amidst the Iranian revolution, and six employees escaped to live for months under the secret protection of the Canadian ambassador. With the likelihood of Iranian authorities discovering the Americans’ whereabouts increasing, CIA agent Tony Mendez devised an operation to enter Tehran under the guise of a Canadian film producer scouting filming locations for a sci-fi movie; he would enter Iran alone and leave with the Embassy employees intact… Argo, true to its oxymoronic claims as a “true story”, documents this operation with genre swagger and flawless period evocation.

Casting himself as Mendez, director Ben Affleck seems to fancy himself as a John Wayne-type here, extending the brooding machismo that pervaded his previous directorial effort, 2010’s The Town (one character laments at one point Wayne’s recent death). With his operation in the balance, Mendez has a third-act moment of epiphany; Affleck indulges in a slow-motion blink into the distance. With belated thrills, our Quiet American Hero steers the film into a race-against-time thrust and its inevitable conclusion. You can read the facts yourself; following pre-end credits footnotes celebrating international co-operation and the merits of the CIA, photos draw attention to certain historical accuracies.

Troubling questions persist, though. The first is: why this true story, why now? Affleck, like co-producer George Clooney, belongs to the curious caste of liberals in Hollywood at present whose political tact and artistic interests put them in recurrent favour with the Academy. To this end, Argo balances repugnant apology for the role played by US intelligence services in the country’s ongoing imperialism with witty, knowing winks directed at industry folks. In response to being rhetorically told to imagine the worst place on earth, effects specialist Chambers (John Goodman) replies “Universal City”, while a Writers Guild of America exec is made analogous to the Ayatollah; further gibes are pointed in jest at directors and associate producers.

Despite Argo’s competent cast and its impressive production values, unpleasant airs linger. At a time of escalating tensions between the US and Iran, Affleck and co. have opted to interpret the past without so much as a nod to the complexities of any revolutionary period. Rather, their view here is decidedly and disappointingly one-note, with the Iranian people depicted as an angry mob and little else, their dialogue denoted by selective subtitles whenever it serves the plot. In a late scene, one diplomat (Scoot McNairy), the only one who can speak Farsi, beguiles Iranian soldiers with tales of Argo’s production, referring to design mock-ups to illustrate his points. Taken in, the Iranians are portrayed as backward, mimicking sound effects and speculating the movement of spaceships; only trigger-happy outrage can bring them out of it. Though the magic of genre filmmaking momentarily sweeps these folks away, it is unlikely that the film is designed to critique notions of “escapism” and a brand of filmmaking that seeks to shirk reality. Rather, the precise opposite seems to be the case: the film champions the magic of deception.

Espousing insidious wit and a narrative sweep, Argo’s apparent Oscar contentions say more about the Oscars than they do the film: indeed, its favourable reception is testament to the skilful extent to which Affleck and his scriptwriter Chris Terrio have embedded their falsely “objective” apology for the establishment.

‘Argo’ was the London Film Festival’s Accenture-sponsored Gala. It is released Friday 2 November.