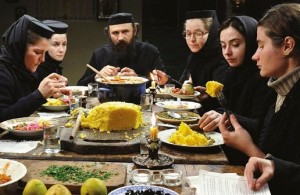 Though no longer new, the so-called Romanian New Wave is continued here by the latest film by writer-director-producer Cristian Mungiu, whose 4 Months, 3 Weeks and 2 Days retroactively drew attention to the country’s filmmaking trends when it won the Palme d’Or in 2007. On the evidence of Beyond the Hills (După dealuri), which won its writer the Best Screenplay Award and its two lead performers the (shared) Best Actress Award at Cannes this year, the general aesthetic approach espoused by Mungiu and his contemporaries is far from becoming tired. Another example of what we might call a ‘durational cinema’, it continues the unmatched tone-setting qualities established by the director’s earlier work as well as by masterpieces such as Police, Adjective (2009).

Reportedly based upon a real incident, Beyond the Hills introduces us to Alina (Cristina Flutur), a young Romanian woman who arrives at an Orthodox monastery, at which lives Voichita (Cosmina Stratan), her old roommate from the orphanage where both grew up. Alina is taken in by the monastery, overseen by an unerringly authoritative priest (Valeriu Andriuta), but her ulterior motive is to ask Voichita to run off with her. The other nuns, meanwhile, supervised by their mother superior (Dana Tapalaga), are at once accepting and suspicious of Alina, whose casual presence challenges their insular customs. Rules are inherited from above and imposed with an unquestioning, passive-aggressive conservatism. When Alina asks Voichita why it’s forbidden to wear trousers in the chapel, the latter replies, “It’s not forbidden, it’s just not proper.” In a later scene during which several of the nuns speculate as to another’s supposed abuse at the hands of domestic violence, one chips in with ostensible non-judgement: “It’s her husband after all.”

Gradually, suspicion accumulates and hysteria exponentially gathers. When Alina intrudes upon communion and has a kind of seizure in response to Voichita’s refusal to leave the monastery, the nuns struggle to strap her down and take her to a hospital in the nearby town. A sympathetic doctor (Costache Babii) advises Alina to convalesce at the monastery. Back there, however, a series of events are sparked by a combination of her own struggles against the rigidity of the religious framework by which the convent is governed and an attempt by everyone there to, finally, perform a prolonged exorcism on her, believing her to be possessed by an evil spirit.

As with others in the Romanian New Wave, there’s a sense here of inter-institutional dialogues and the ongoing deferral of responsibility to which each contributes: Alina and Voichita’s relationship is understood to have been sparked by parental abandonment, while their departure from the orphanage was forced upon them. Scenes in the hospital recall The Death of Mr. Lazarescu (2005), while those at the monastery come to resemble that film’s blackly comic repetitions.

Beyond the Hills is full of superlative moments. Mungiu introduces suggestions of horror into what is now a familiar aesthetic; just as Police, Adjective was an enthrallingly minimalist take on the police procedural, this hints increasingly towards a different genre, the exorcist film. Never directly showing us the supernatural forces that apparently inhabit Alina, the film unfolds from a detached perspective, which gives it both an immediacy and an ambiguity that demand and attain patience: you’re never quite certain where the film is headed, and, like Cristi Puiu’s Aurora – covered as part of our AV Festival report earlier this year – an evaluation or even analysis is difficult until its full narrative has been digested.

Mungiu achieves a riveting complexity here: on the one hand, he teases out contradictions in institutionalised doctrine, while on the other he refuses to condemn his characters. One scene sees the nuns gather to assist Alina in deciding which of the 464 sins she has committed in preparation of her first confession to Father. As with the rest of the film, Mungiu opts for a long take and a cramped frame, the immobile camera and lack of editorial manipulation drawing attention to the increasing absurdity of Alina noting each trivial sin as it’s read out to her; one of the nuns suggest it’s easier to just take note of the sin’s number, as if it’s a matter of taking orders in a restaurant. Later, one of the sisters faints after seeing a “black cross” in some wood she’s been cutting. Called to the scene, Father tells everyone to “get on with your tasks, enough of this rubbish about signs.” Later in the film, the mysticism and iconography upon which his power rests are threatened when Alina enters the altar and calls bullshit on the whole thing. But rather than side with her, we’re encouraged to empathise with Father; Valeriu Andriuta’s performance is particularly warm, and the film’s makers should finally be acclaimed for addressing its cast of characters with an exhilarating humanism. As far as national cinemas go, then, the Romanians continue in this regard to be unmatched.

‘Beyond the Hills’ screened as part of the London Film Festival’s ‘Journey’ strand, in association with ‘Sight & Sound’.