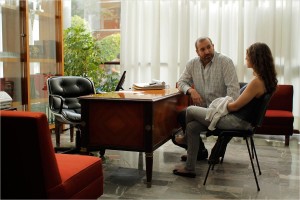 Did we really need another Mexican film about the prolonged fallout of a fatal automobile collision? That’s the unfortunate question prompted by After Lucia (Despues de Lucia) as soon as it becomes apparent that Roberto and teenage daughter Alejandra have arrived in Mexico City looking to start afresh in the aftermath of his wife/her mother’s death in a car crash. Here, we are reminded of the fashionable miserablism that saturated Alejandro González Iñárritu and Guillermo Arriaga’s loose trilogy of films, which began with Amores perros (2000), continued with 21 Grams (2003) and concluded with Babel (2006), all of which centred around devastating car accidents and the far-reaching emotional consequences that they resulted in.

After Lucia might be another film about our failure to communicate, but it’s not clear whether writer-director Michel Franco wishes to implicate Alejandra (Tessa Ia) as well as Roberto (Hernán Mendoza) alongside the cruel school pals who taunt and bully the former after she’s videoed having drunken sex with one of their lot. To be sure, Franco enjoys the retention of ambiguity and cranks up the tension of having his younger protagonist endure almost unwatchable group bullying. Furthermore, he opts for a stubborn camera and long takes, heightening his audience’s helplessness. “If only she’d tell daddy!” we might whisper to ourselves in exasperation; watching an unpleasant party scene during a school trip to Vera Cruz, meanwhile, we hope that the film will turn out to be a Carrie update, injecting telekinetic revenge on the brats who mock, humiliate, force-feed, assault and rape Alejandra so persistently.

That might have added interest, but as it is, Franco has already embarked upon a “realist” depiction of bullying that never quite rings true. That Alejandra’s new group of friends would turn so disproportionately on her in response to her having sex with someone seems clichéd. Sure, there are all kinds of jealousies and forms of bullying that erupt between adolescents, but Franco’s cast of cohorts are so impossibly monstrous that earlier scenes, in which they appeared more nuanced, retroactively appear as if the filmmaker wants it both ways. When depicting a trauma as unique as bullying, in such a specific context as high school, an artist enters certain obligations; on this evidence, however, Franco isn’t up to the task, so hysterical is his vision of something as difficult to comprehend and speak out against as bullying.

Additionally, certain scenes seem too self-conscious, such as that in which Roberto succumbs to road rage and exits his car to confront another driver, only for the camera to remain fixed in its place so that their fracas unfolds entirely out of view. After Lucia isn’t without its moments, though. Reaching for symmetry, it begins with Roberto navigating one vehicle and concludes with him steering another. Just as the former begets immediate ambiguity, the latter denies a resolution; both are powerful in different ways, and illustrate Mendoza’s captivating presence as an actor. Indeed, his is the more interesting character of the two, and his comparative absence from the narrative in later scenes might account for why the film gets more tedious as it progresses.

‘After Lucia’ was part of the London Film Festival’s ‘Official Competition’.