LFF 2012: Beasts of the Southern Wild 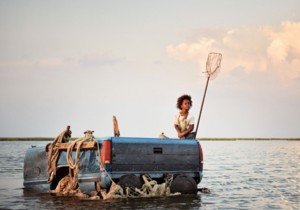 At one point early on in Beasts of the Southern Wild (adapted by Benh Zeitlin with Lucy Alibar, from the latter’s play Juicy and Dangerous), an adult character lectures six-year-old central protagonist Hushpuppy to embrace meat-eating as part of “the fabric o’ the universe”, or “the buffet o’ the world”. Like such wording, the film itself espouses a tough, hardened survivalism tempered by that rare feat: a genuine sense of emotional, tonal and narrative unpredictability.

The film, which won first-time director Zeitlin the Camera d’Or at this year’s Cannes, takes place in the Bathtub, a southern-state backwater whose community have been cut off from the rest of the world by an vast, impermeable wall. Against a far-off industrial backdrop, we are introduced to this hermetic world through the viewpoint of Hushpuppy (Quvenzhané Wallis), whose deadpan-cum-overawed voice-over might hark back to early Malick. Clad in a white vest, orange underpants and dirtied wellies, our young heroine cuts a defiant figure, her afro aglow like some halo of the natural world. Abandoned long ago by her mother, Hushpuppy shares a ramshackle abode with her dad, Wink (Dwight Henry), as well as an unspoken mutual compassion.

Hushpuppy and Wink’s relationship lies at the heart of Beasts of the Southern Wild, providing it its toughest as well as its most tender moments. Like the textural grit of its cinematography, this father-daughter bond has a visceral edge in which in one moment Wink denies Hushpuppy the right to cry or even depend on him, and in the next reassures her with a barely convincing swagger: “I got it under control.” (When a fierce storm rages, Wink’s response is to shoot at the sky with a shotgun.)

The film seems driven by a Herzogian quest for new images; a brief, surreal river journey recalls Aguirre, the Wrath of God (1972), while its focus upon a closed-off community and its singular internal bonds is reminiscent of Gummo (1997), the debut feature by the Herzog-inspired Harmony Korine. (Its exciting balance between subjective narration and detached whimsy, meanwhile, favourably brings to mind Pedro Costa.) In this sense, detours become the stuff of depth: a late interlude, in which Hushpuppy and three young friends seek mother figures on a manmade floating island, is exceptional.

Since it’s made clear that its cast of eccentrics have been cut off by the world beyond, the “beasts” to which Zeitlin’s debut feature refers could be these very people. Or it could be the giant wild boars that Hushpuppy imagines prowl the swamps in savage, indifferent hunt for prey. More likely, the title is a double entendre, encompassing both its human characters and those creatures destined to become meat, such as the fish that Wink catches with his bare hands in one of the film’s most naturally beautiful moments. Indeed, in this sense it also shares with early Malick a questioning and invigorating pantheism. As Hushpuppy herself remarks when her father has a near-death experience, “Daddy coulda turned into a tree, or a bug.” The fat o’ the land never seemed so adventurous.

‘Beasts of the Southern Wild’ screened as part of the London Film Festival’s ‘First Feature Competition’. It is released theatrically on Friday, 19 October.