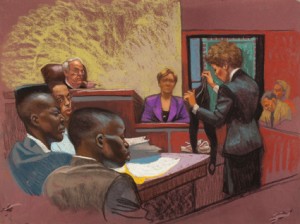 In the early hours of April 20, 1989, a female jogger was found left for dead in Central Park, New York. Badly beaten, she had also been raped. Mayor Ed Koch promised a quick and successful pursuit of justice. Within hours, three teenagers, who had been arrested earlier that night on unrelated charges, came to be detained as chief suspects in the incident. Soon after, two more arrests were made. In the course of mere days, the NYPD had interrogated and elicited confessions from each of the five young men that implicated each other and themselves in the crime. Relying mostly on present-day testimonies, The Central Park Five is a powerfully linear documentary account of their wrongful conviction.

The five men, all between 14 and 16 years of age in April 1989, are Kevin Richardson, Raymond Santana, Korey Wise, Yusef Salaam and Antron McCray. Their arrests that night were, we are told by New York Times journalist Jim Dwyer, “part of a proxy war”, in which “these five men were the proxies of all kinds of different agendas.” “Truth” and “justice” are only the misnomers that drive such a war, playing on racial and class-based stereotypes in order to preserve a police department and political order whose incompetence was (and arguably is) under systemic pressures to perform and provide favourable stats, not least from the media-assisted discourse of White, Middle-class, American Dream Careerism. Ken Burns, David McMahon and Sarah Burns do well to assemble this social context early on in The Central Park Five, painting New York as a city whose image was that of an impoverished, almost-abandoned place defined by corruption, conservatism, fear and hysteria.

The case alone, of five wrongful arrests and convictions, illustrates this with incendiary clarity, though the individual testimonies of the eponymous five point to a sobering humanism that defies a judicial system that has not only ruined their lives, but is indirectly responsible for the further rape and murder of other women by the actual perpetrator, Matias Reyes. Indeed, as another expert witness reveals, had proper conduct been followed in the hours, days and weeks following the initial discovery of the “Central Park jogger”, Reyes would likely have been at the very least linked to the crime, and doubt very much placed upon the confessions drawn from the boys after hours of isolated pressure and coercion.

The filmmakers play things straight, cross-cutting to emphasise witness corroboration while keeping things strictly linear. The narrative of April 19 unfolds with infuriating retroaction: the five boys were out in the park that night as participants, to varying extents, in a number of unrelated crimes (bloated to endemic proportions by the media). Richardson and Santana – who didn’t even know each other – were detained with three others for “unlawful assembly”; Richardson received injuries to his face during the arrest, when one police officer smashed his helmet into the boy’s face. Subject to racial abuse, the two boys were duped into providing statements against one another, thereby implicating themselves in the assault. One talking head tells of the “prestigious Manhattan detectives” who claimed the case as their own victory: “they had a lot of pride and swagger”, we are told. The media’s reaction, meanwhile, was predictably abhorrent. Headlines and on-screen quotations from newspaper articles are telling of the sensationalist, “guilty until proven innocent” logic by which these right-wing muckrakers operate. Contributing to an ongoing class war, the media was quick to perpetuate Mayor Koch’s derogatory remarks about the five boys and, by implication, the non-White races to which they belonged. Proponents of the death penalty emerged in the furore. In contrast, coverage of the victim’s progress and recovery from a coma highlighted her middle-class, professional background. Indeed, her assault wasn’t the first or last of its kind that year (there were over 3,000 reported cases in 1989 alone), but its interracial element was inflammatory.

The attack was consciously exploited for political agendas that fed upon and helped escalate a hatred for the lower, working classes. Once all the Harlem-based boys had been tarred with suspicion, there was seemingly no halting the cries to bring them to justice – tragically, not even rationality and factual evidence could get in the way. That inconsistencies were present in the five boys’ written and videoed testimonies didn’t, in the end, matter. Regardless of major discrepancies, erroneous details, an unlikely timeline of events, and the conditions under which they were obtained,  personal confessions remained “irresistibly persuasive”.

Legal miscarriage is only the beginning. In the latter stages of The Central Park Five, we learn of these men’s lives in and after their jail terms: the real dangers they faced during their initial incarcerations at notorious juvenile centres designed for youths who had committed serious crimes; the practical difficulties with which they readjusted to life after serving their terms – the slim likelihood of getting a job, the humiliation of registering as sex offenders, the draw of criminal activity. Inevitably, the film here implicates such a system as punitive not rehabilitative; the damaging impact that imprisonment has had on these men is heartbreaking alone, but that it was as a result of political ineptitude, procedural incompetence and irrational war-mongering by the establishment and its media is finally unforgivable – and, perhaps, irreparable.

Tellingly, after Matias Reyes confessed to the brutal crime and the five boys were pardoned after DNA samples confirmed Reyes’s presence at the scene, the media and police force’s reactions weren’t half as fierce as they had been in 1989. As one witness says, their actions can be defined as examples of “institutional protectionism”. The Central Park Five is an excellent and moving indictment of a thoroughly disastrous episode in New York’s political, policing and social history, and at a time of growing and legitimate anger directed at the political establishment and the police force recruited and employed to preserve it in the US, the film carries far-reaching implications indeed.

‘The Central Park Five’ is part of the London Film Festival’s ‘Documentary Competition’, and screens on Saturday, 20 October.