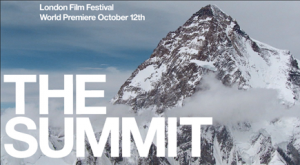 K2 may boast only the world’s second highest peak, but as the most dangerous to climb, its reputation in the mountaineering community is notorious. The Summit is a documentary comprising reconstructions of, archive footage from and witness testimonies by those involved in the August 2008 attempt to reach its summit, in which half of the 22 climbers who made it to High Camp, the final base before the peak itself, were killed. While The Summit invites obvious comparisons to 2003’s Touching the Void, the actual incident to which it relates is of much fascination in itself, and the film is a meandering but mostly compelling attempt to grasp what exactly happened during the fateful expedition.

Opening exposition emphasises the dangers that ascending K2 involves, as well as the respect and awe it demands by any climber who attempts to conquer it. Early soundbites anthropomorphise the mountain, and Robbie Ryan’s cinematography captures it as a monument of sublime beauty, with a character that’s at once serene and formidable. We are introduced to the key principals involved in the trip, whose individual narratives provide the film its multi-stranded emotional arc: Pemba Gyalje Sherpa, Marco Confortola, Cas van de Gevel, Gerard McDonnell, Cecilie Skog and Wilco Van Rooijen. Structured almost as a mystery, the film resembles Rashomon in its dependence upon differing viewpoints of one event. Director-producer Nick Ryan tasks himself with piecing together these fragments to create a comprehensible whole that might offer some hitherto elusive closure for the people involved.

Because of this, the film repeats certain points several times, emphasising its own piecemeal construction and the fallibility of witness testimony. While Ryan is sensitive to and honest about certain discrepancies that emerge from his interviewees, he lends validity to their recollections by arranging them into a mostly corroborating pattern. His editorial hand is always obvious, however, and when some interviewees disappear for lengthy intervals only to reappear again much later, the film resembles a made-for-television documentary, providing information as if to promise some future closure, if only we’ll keep watching after the next ads break. In the opening stages especially, cuts- and fades-to-black result in a stuttered series of false starts, and Ryan risks overdramatising things. Detours, as well as the inclusion of a subplot about Italian climber Walter Bonatti, who was part of an Italian expedition to K2’s summit in the 1950s, make one question the extent to which Ryan trusts the inherent draw of his material.

If its roundabout documentation is in overall contrast to the audacious linearity of Touching the Void, though, The Summit does accumulate a more comprehensive account as it goes on, and it becomes clear that, its detours notwithstanding, Ryan’s structural approach is to some degree necessary and, ultimately, effective. Bursts of clarity are offered from survivors Van Rooijen and Pemba in particular, while interviews with the victims’ relatives are heartbreaking. The tragedy they share is doubly unthinkable because of K2 itself: its sheer size and hostile conditions are absurd, and Ryan returns often to one image in particular, in which the camera pulls back from four wounded climbers who have been stranded on the mountain’s ‘Death Zone’, their utter vulnerability difficult to digest.

The Summit argues that the incident was the outcome of a multitude of factors and does well to account for them: errors in judgement (scientific details are given as to the effects a sustained high altitude has on the brain), organisational weaknesses, divisions in responsibilities, and chance itself. The last of these is of course part of the fundamental reason why many people climb in the first place: to confront nature in all its treacherous indifference. In this sense, Ryan is celebratory of his cast of climbers and their extraordinary will to survive and save others, especially Gerard McDonnell, whose body was never found and whose family’s quest for resolve provide the film its investigatory purpose.

‘The Summit’ screens as part of the London Film Festival’s ‘Documentary Competition’, and has its world premiere on Friday 12 October. It also screens on Monday 15th.