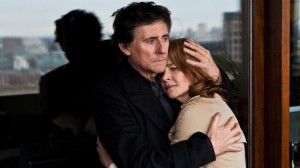 I, Anna in all ways is a family affair; the film stars Charlotte Rampling, who in her 60’s still looks stunning and can still give thrilling performances off slightly unhinged women. The film is adapted and directed by Barnaby Southcombe, whose previous credits include Holby Blue, Waterloo Road & Bad Girls. But I hear you ask where the connection is, different surnames? Well director and actress are actually mother and son, which marks a dynamic debut for the pairing in this noirish thriller, also starring the subtle Gabriel Byrne (In Treatment).

The film looks (or else, stares rather boldly) at a very tight (and oddly haunting) family unit of three generations of women; a mother Anna (Rampling), her daughter Emmy (Hayley Atwell) and her baby daughter all living in the same apartment. This apparent calm between these women is disturbed when Anna meets DCI Bernie Reid (Byrne) and suddenly a catastrophic secret threatens to reveal itself and unravel the very tightly wound Anna from the world she believes she live in.

Southcombe’s idea for this film came from reading the book of the same name written by Elsa Lewin, who was a psychoanalyst based in New York when the book was published in the 1980s. Southcombe told me that he has taken a very American centric story, and brought it home to London. He moved the story from the 80’s to the current day and therefore has been able to take advantage of many of the advances that we have today. Also, by moving the story to London he does two things; he creates a character out of the atmosphere, rather than siding with the picture perfect capital, he represents the city as dull and gloomy, overbearing and watching the characters every move but he also manages to unearth an uneasy and garish undergrowth throughout the city, which the characters almost become a microcosm for within his story.

The story starts with Anna, leaving her daughter and granddaughter at home and taking part in a night of speed dating,which her daughter has persuaded her to do. Anna is represented as very frigid and organised, she shies away from human contact and doesn’t want the attention on her; therefore the following scenes introduce the audience to an unreliable character – already we know she is going to be the perfect femme fatale for this deadly noir. As the various men don’t catch her attention, she meets George Stone (played by a very young looking Ralph Brown), whom she instantly feels a connection with (thanks to the alcohol) and they leave together. The rest is history as they say…

… Anna is next seen leaving the building where Stone lived and she bumps into Byrne’s character, who is investigating amurder (which we later learn is Stone himself). Straight away the story is set up, so many questions are posed; did Anna 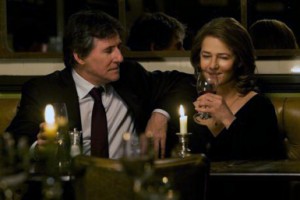 murder Stone, was she meant to bump into Bernie and why does he suddenly start obsessing over her? Rampling calmly allows all these questions to start to surround her, as she sweeps gently across the screen but also leaving destruction in her path – she wouldn’t be a good femme fatale otherwise. She quickly begins a relationship with Bernie after they meet a second time (at speed dating) and she doesn’t remember meeting him in the first place.

For me, the sequences that are done during the speed dating are stunning – they perfectly illustrate a full room of people filled with emptiness, each and all of them feel like the only ones in the room. The ways in which Southcombe achieves this is via a balance between the music, lighting and dialogue – the sound creeps up on the audience throughout the film and keeps you on the edge of your seat. Somewhat sparse on dialogue, that doesn’t affect the suspense at the most important parts and the lighting knows exactly when to be light and when to be dark. The verisimilitude that Southcombe creates, through lighting, he further explores by making the audience watch important scenes through windows and glass panes; he is creating a sense of alienation for the characters from the audience, he is telling the audience to keep this world at arms length and be aware that perhaps all is not what is seems. We look in at the characters, like animals in a cage rather than them looking out.

Another part to the film for me, was the slightly incestious elements between the mother and daughter; specifically the scene in the bathroom when Anna was in the bath and her daughter comes in to brush her teeth, this was somewhat disturbing. During the sequence, Rampling lays posed in the bath; almost waiting to be painted. She is draped gently across the screen and Emmy walks in. She starts brushing her teeth and the two women’s eyes catch each other; as if they are keeping a dark secret which the audience must never know. Anna then comments that the brush is hers and the couple laugh it off, somewhat mysteriously, Emmy walks out with the brush and yet the brush remains… Odd? 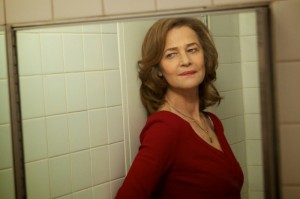 I don’t wish to divulge any further plot details about I, Anna, save that the twisty ending (both narratively and physically by the actors) may not be the biggest surprise, and many have come away feeling they guessed it but really for me, it was less about narrative shock and more about the performances (for which, they were pretty strong). Rampling is known for portraying women who hide secrets and for doing roles, which cause her to become introverted; I, Anna is no different. In the last act of the film, we find ourselves dealing with mental illness and depression caused by grief and the film deals with this fairly if a little surface like (but it occurs too late in the film to look at deeply).

As for Byrne’s performance in the film, he manages to portray a man who should be responsible and in charge of all his faculties very well. Bernie falls hard for Anna, and is caught between what he should do for his job and what he will do for the woman he has gotten to know. The rest of the supporting cast also perform within this tightly knit thriller (slash love story) with Eddie Marsan, Atwell and Brown all fulfilling the roles they need to show the madness of Anna.

It may not be to everyone’s taste, and I know from speaking to others that I picked up on stuff others think I have looked too far into but I feel this is a worthy thriller with a lot to say for itself, a good debut feature, and I look forward to seeing more work from Southcombe in the future.