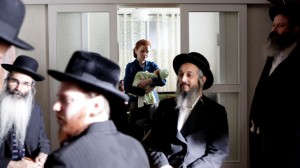 As I was getting my research together on this film before writing this review, I was happy to find out that it is Israel’s entry as Best Foreign Language film at the Academy Awards 2013 – something, which I proclaimed should happen when I left the cinema from watching this emotionally punchy drama.

First time director, Rama Burshtein has, with Fill The Void, created a world looking at a woman’s view of Tel Aviv’s ultra-orthodox Hasidic community from the inside, something that to those on the outside looks like something from another world. In recent years, very few Israeli films have caught the mainstream’s attention for being grabbing as well as insightful (except perhaps 2009’s Eyes Wide Open dir. Haim Tabakman), but Fill The Void, has been the most emotional and tender film that I have seen the cinema for a long time. From the storyline, to the acting, to the ways in which the characters are portrayed on the screen, Fill The Void, found me learning about a community, who live in such a different way to myself and yet, I can empathise with them on an emotional level, because at the end of the day – we are all only human.

Burshtein’s film centres around Shira Mendelman (the traditionally beautiful Hadas Yaron), the 18 year old daughter from an ultra religious Hasidic family living in Tel Aviv. The film starts with Shira and her mother, Rivka (Irit Sheleg) ‘shopping’ for a husband in a local supermarket – the scene is almost played for laughs when they can’t find the man they are meant to be following. The close ups on both the women’s faces are already telling us that this is going to be an intimate film where we are going to become very personal with the characters, but this opening scenes is a beautiful and cunning introduction to a story, which hasn’t any humour whatsoever. The two women look as if they are on a mission, going down the dairy aisle (a joke, I think for the Jew’s in the crowd) as they sneak around looking for the man who is meant to be marrying Shira. We learn early on that the girls become married very quickly in this community, and they are meant to be happy with their husbands; they stay at home, have babies and make soup. Although the family is aware that Shira should like the man she is going to marry, they are also aware that she must get married soon so that she can start a life of her own.

As the introduction finishes, and the first act of the film starts, we are introduced to the rest of the family in their small 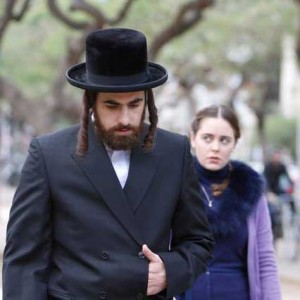 apartment during a Purim celebration. The film makes sure to show the differences between the men and the woman as both groups find themselves, constantly in different spheres of living and in different rooms. Although, there are many instances they are all together, we are reminded throughout of the gender limitations of this community. The story sets itself up, with Shira’s pregnant sister, Esther (Renana Raz) dying during childbirth and this leaves her husband, Yochai (Yiftach Klein) caring of their baby without a wife, the baby without a mother.

On this sad occasion, the thoughts of Shira’s marriage are put on hold and instead the focus moves to Yochai and the baby. Questions are raised, are they going to stay in the area? Will Yochai remarry? But Rivka finds herself at an emotional crossroads, she wants her daughter to be happy but she wants her grandchild to stay around (after all, it’s the only remaining connection she has to Esther). She suggests Shira marries Yochai, and this is where the film really begins.

What is important to remember with this film is that one feels so closeted from the rest of the world, that those who are aware of Israel and specifically Tel Aviv, cannot really get close to it’s location. The family unit is so important, so tight and controlling that one doesn’t see the rest of the world around them. This is precisely the feeling of the family in this film, without taking too much consideration of the pun, keeping it all in the family – the family is seen as a microcosm for a community constantly at war with itself, emotionally and physically. It is almost as if they really live a different version of reality, and this is fine for them and has worked for years, but as soon as Shira starts to think of her own emotional state, the walls come down for all the characters and they find themselves in a place that changes them all. 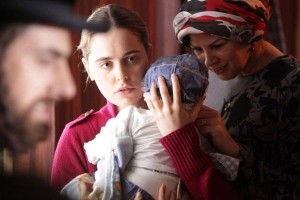 Burshstein commits herself to a rather simplistic style throughout Fill The Void and each scene is shot straightforwardly without too much stylisation. This allows the characters, sets and costumes to become the main focus for the audience as they are meant to be concentrating on the emotional intensity of the narrative. The result is a more realistic balance than many other films today, and although Burshstein herself counts David Lynch as a favoutire, she finds herself making a film more aimed towards a sort of classicism, with precise framing and beautiful lighting.What I do admire within this type of filmmaking for is her flair of the beauty of emotion throughout the scenes, and putting in a sense of interiority and poetry when the time calls for it.

Calling to mind the wedding near the end, the entire sequence is stunning when each of the girls comes to give Shira their love and blessing for the day. She sits praying, shrouded by an intense star lighting in the most stunning wedding dress and yet, despite this happy day, she cries until her make up runs. There is constantly a sense of tension throughout the entire film about the right, and the wrong, what seems to be the best decision for the family and the best decision for Shira. What I thought throughout was that, there was never going to be a question about the wedding, she would do it for her family; to keep Esther’s child around but it was how, emotionally, she was going to get herself there in the first place.

Another beauty thought about the film is that, the question of sex was never something of importance. Despite the fact Shira

was being asked to marry her brother in law, it was never a question of being wrong, or being odd but rather whether she really loved him or whether she felt it was right for Yochai and that Shira could replace her sister in his life. This particular point for me, made the story thrilling because although I was thinking about it (as I am sure, much of the audience is), none of the family are – it is something not worth noting in this community.

Lastly, the performance from the entire cast were some of the best and emotional of the whole year. Yaron does an incredible job as Shira, caught between her own life and her families and wondering what is the best thing to do. She brings a sense of raw emotion to the role and looks to her faith to give her the answer- something the people in this community are told to do, but when the answers don’t come straight away she has to look elsewhere. The other standout performance was from Klein as Yochai; he has just lost his wife and he, along with Shira are having to reconsider and contemplate their futures. They have much wider questions; they are scared of death and what comes afterwards, but the film always falls back on it’s beauty when it doesn’t have the answers – which I wasn’t expecting!

Fill The Void is emotionally and visually stunning, with brilliant performances and a gripping storyline, I would highly recommend it.