I Saw the Devil Review 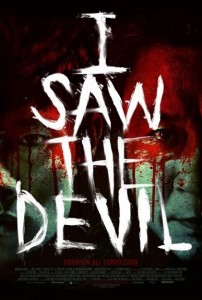 From the Korean director who brought us A Tale of Two Sisters, Kim Ji-Woon once again delivers the goods in the form of this outstanding murder and revenge horror film, I Saw the Devil.

From the opening scene, you’re enveloped into a sadistic and gruesomely-violent unfolding plot, which follows psychotic serial killer Kyung-chul (Choi Min-sik) who makes the unfortunate mistake of murdering the daughter of a retired police chief. When her savaged remains are uncovered by her top-secret agent fiancé Soo-Hyun (Lee Byung-hun) he vows to take matters into his own hands and declares bloody vengeance against the monster.

The violence displayed between these 144 minutes will prove too much for too many. The acts of murder are sickeningly raw and quite simply do not satisfy for easy viewing pleasure. But while on the surface it may appear like any other stalk and slash horror film, as the plot thickens it’s obvious that Ji-Woon’s intentions run deeper than to play out a chase of mercilessly retribution. Viewers are welcomed to witness a destructive path of vengeance which urges us to consider the lengths of human revenge and morality.

This Korean-language movie is most definitely not for the faint hearted but the savage display of brutality is not where the film faults. As a female viewer, it was hard to overlook the simplistic depiction of women in the film, who served as nothing other than powerless victims.But you can’t fault Ji-Woon’s compelling cinematography, with the film being played out in mostly black and red shades to create visual tension at exactly the right moments. And his creative sequenced shots serve to compliment both the fast-paced drama and the grossly intimate killings.

If you’re too squeamish to sit through most of Hollywood’s attempts at bloody horror, I Saw the Devil may not be your cup of tea. But if you can get through the gut-wrenching acts of slaughter and surpass the butchery will an open mind, you’ll find that this film truly sets the bar for Korean filmmaking. It’s no secret that Ji-Woon is a master of this genre, with A Tale of Two Sisters becoming the highest-grossing Korean horror film of all time, and it seems he successfully injected some of that horrific magic into I Saw The Devil.

I Saw The Devil opens in cinemas on Friday 29th April.