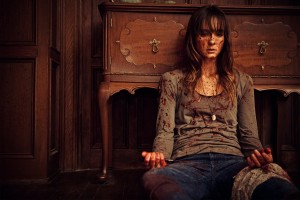 Adam Wingard (A Horrible Way To Die) returns after a selection of short films with the gruesomely brilliant, You’re Next starring Sharni Vinson, Nicholas Tucci, Wendy Glenn & AJ Bowen. What makes You’re Next simply one of the best films from FrightFest this year is the fact that it is a well acted, interesting story with a strong and intelligent structure; it is a horror film, a thriller and one of the best home invasion movies for a very long time. The film also plays cleverly with the institution of family, playing upon our fears of being attacked in the home and finally makes an interesting social-economic point that really almost everything that happens comes down to money.

The film introduces Erin (Vinson) & Crispian (Bowen) as an odd couple; one seems young, full of life and excitement whereas the other seems a little down and out. The first section of the film really concentrates primarily on the dynamic of the couple and why they really are together. What is most intriguing about the film itself is that both Vinson and Bowen have excellent chemistry; nor does Erin adhere to the pretty girl stereotype of being in a relationship for money. The couple genuinely seem in love and this adds to the suspense and excitement of You’re Next as the first hurdle to jump is one much of the audience will be knowledgeable on; meeting the parents of your partner.

You’re Next follows the couple as they interact with the rest of Crispian’s family; the parents, the siblings and their other halves as 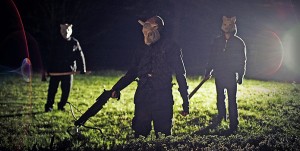 they all come together to celebrate Crispian’s parents wedding anniversary in a beautiful, large, old house that his father recently brought as a retirement project for himself. But as Crispian points out that builders have spent more time in the house than his father has. Therefore, very early on the in the film, the presence of money can be felt and it reverberates throughout the rest of the picture.

What Wingard does almost straight away to build tension into the film is have the siblings at war; there is a constant competition between the children for the adoration and attention of the parents. There is also a violent dynamic between Crispian and Drake (Joe Swanberg), which seems ready to explode at any time. Again, just as with money, You’re Next is telling the audience that sibling rivalry and family issues will raise its ugly head throughout the film and will become one of the most integral parts of the story. Whilst each of the children bring their various other halves, the film is filled with intense and challenging close ups to all the characters, creating a sense of alienation for the audience. Whilst in reality, to get that close to someone so quickly would become uncomfortable, the film does the same thing. 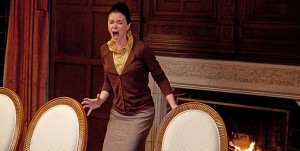 The second part of the film (out of three sections) starts with a family dinner. Everyone has come together to sit and celebrate, although it isn’t long before arguments erupt and the calm of the dinner is well and truly over. You’re Next doesn’t allow any audience rest-bit for one moment because daughter, Aimee’s (Amy Seimetz) boyfriend, Tariq (Ti West) wanders over to the window because he thought he saw something. Without explanation or a second to comprehend, an arrow shoots straight through the window and into Tariq’s head, killing him almost instantly. For comedies sake, the family doesn’t realise this murder until a few seconds later and then on cue, madness ensues and the family dinner is well and truly over.

What follows is an incredible section, pitting those on the outside versus those on the inside. Fighting for their own survival, the family barricade themselves in the house on the advice of Erin. What You’re Next also does really rather wonderfully is the cheerful sense of humour throughout; it almost seems ironic that these murders are happening as so much comedy happens throughout. So, it turns out that Erin was brought up on a survivalist retreat by her father and so she knows instantly how to outwit those outside and look after herself. What the family doesn’t count on is the possibility that one of the assassins may already be inside the house.

This group of savage murderers are all wearing animal masks, which may have been done before but for some reason there is 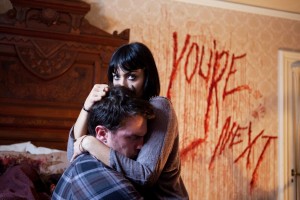 maximum effect in You’re Next. The lighting is also very interesting; mixing together the darkness ready to swallow everyone up outside and in certain areas of the house compared to the lightness of the dining area and the lobby, where a great deal of the film actually take place. The sound is also carefully used in the film to create intense tension in certain spots; showing off what horror sound really can do to its audience.

The final section of the film is based on a twist that one of the family is harbouring a dark secret; once the audience is made aware of this, the rest of the film finally makes sense. It may not be the most surprising twist in the history of horror cinema, but it certainly is entertaining and intriguing. Erin carries on fighting to the end, even killing one of the masked men. This particular scene in question is really rather hysterical; when a big guy with a shot bow is outwitted by a model looking girl and then maimed and killed, you certainly understand that all stereotypes are being switched on their heads. Following on from this, one of the other masked maniacs breaks down on seeing his brother and colleague killed, it jars the audience to see this happen and excites them further. 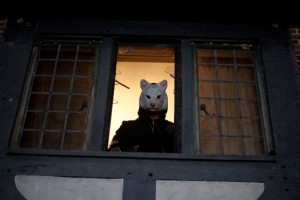 You’re Next is full of bloody, gory, suspenseful excitement; keeping the audience on their toes throughout and really hoping that someone gets out alive. The acting, particularly by Vinson is really enjoyable and whilst it may not be winning her any Academy Awards any time soon, she certainly has the makings of a strong willed, intelligent scream queen. Wingard and crew have created a home invasion movie that is watchable again and again, carefully filled with nuances that you may not have seen the first time around.