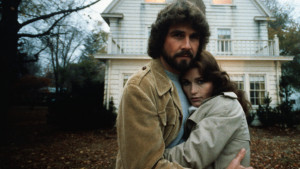 1979 saw the release of the first The Amityville Horror film and in the decades since, there have been countless sequels, spin offs and remakes but none have ever quite enjoyed the acclaim of say other horror series that started around the same time as the original. Even the ’79 film starring James Brolin (father of Josh), Margot Kidder and Rod Steiger didn’t enjoy much critical acclaim, whilst it did enjoy some box office success at the time.

Second Sight have recently released a restored Blu-ray version of the film, which looks crisp and clean, whilst the sound is clear – a great job has been done to the film itself. Sadly, none of this helps with the actual quality of the original film, which has a serious issue in its pacing and taking itself too seriously, often finding itself dull and uninvolving. Based on the novel by Jay Anson, which in turn was apparently based on the real life paranormal experiences of the Lutz family, the story has always been questioned over the truth in it.

Following a mass murder the year before, George (Brolin) and Kathy (Kidder) Lutz believe they have found the perfect family home on the coast of Long Island. Despite being told of what had happened, the couple decide to buy the house and move in with their three children but soon they learn that the house remembers and even the help of a Father Delaney (Steiger) isn’t going to stop the demonic presence making their lives a living hell.

Whilst there are certainly nods in horror cinema today to the original Amityville; the creaking house, possession, the

destruction of religious iconography and the family being torn apart by something that cannot be seen, none of these elements work successfully at drawing the audience into the story. Unlike other still popular horrors of the 70s and 80s, this seems dated and long winded, with little pay off in the end.

This re-release does have a great list of additional features including new interviews with James Brolin, Meeno Peluce, screenwriter Sandor Stern and soundtrack composter Lalo Schifrin but they will unlikely excite a viewer unless you have already expressed a liking to the original film.

Certainly one to watch as part of the classical horror film education but with little use of viewing a second time, it is clear why filmmakers have tried over and over to make something of The Amityville Horror, unlike films like Halloween and A Nightmare on Elm Street, this one can be improved (but we are just waiting for it to happen).