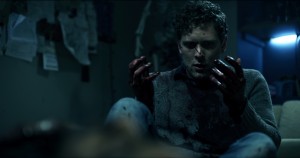 Cody Calahan’s first feature, Antisocial, crawls under your skin from the very first moment and doesn’t ever let go. What Calahan does really rather brilliantly is propose what would happen if we accepted our lack of privacy in our day to day lives and a social media site could cause a worldwide epidemic… so nothing big, I hear you say.

Today we live in a world that is governed to an extent by our status on the various social media sites and applications; show the world what you are doing on Facebook, put a sentiment out there on Twitter, hook up on Grindr or find a restaurant on Foursquare – there are new social media forms coming out every week but how do we keep up with them? Many could suggest that Calahan’s dissection and exploration of social media may be preachy or represent an annoying soapbox attitude but by today’s standards, social media is one of the most important things on the agenda to be discussed and what better way to do so, than in a horror film; a genre, which is known to be progressive and conversational.

The film centres on a group of college students, concentrating on Sam (first time actress, Michaell Mylett) who starts her day by 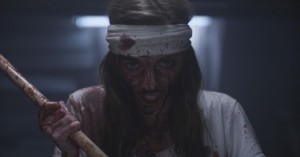 deleting her Social RedRoom account (a fictional Facebook). In the lead up to this pretty major decision, she has been trying to get in contact with her boyfriend all the day. Whilst she tries to call him and arrange a meet up, he declines her call and offers an online video chat via Social RedRoom instead. She has some news to discuss with him but wants to know where he was the night before. When it becomes clear that he has cheated on her, he suggests they spend some time apart. Quite instantly he ends the call and Sam’s phone beeps; it is a RedRoom alert to tell her that he has changed his relationship status to single. With that, she deletes her account.

Antisocial takes place on New Years Eve, the night where parties are held and resolutions are made; the next year will always be better and change will occur, that is the mantra for much of the Western world. Mark (Cody Ray Thompson) calls Sam to find out whether she will be coming to his party this evening, she isn’t sure but he manages to persuade her to come along. He comments that he has seen her news before she has even had a chance to tell anyone – here marks the beginning of discussion around a lack of privacy. When Sam gets to Mark’s place that evening, Calahan introduces the partygoers in a really intriguing way; through their Social RedRoom account, except for Jed (Adam Christie) who also deleted his account. The audience are shown all the details of the characters through their accounts; facts that possibly would have taken ages to be told to an audience, shown instantly. This is the films way to discussing privacy issues further but also admitting that today’s audience are fans of instant gratification, we want it now and we can have it now. 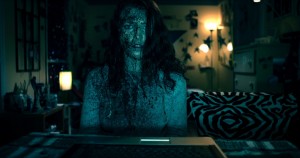 What ensues is that a virus is turning people into mad, attacking, zombie like creatures. A constant stream of news comes from the television set as well as RIP notices on the social site about those who have been lost that night tell the audience all they need to know. The reporters tell those that are still unaffected to board up their houses, wait it out and not let anyone else in. So that’s what our party group do – shame their New Years isn’t going as planned. The only real communication that the group have with the outside world is via a Skype type conversation with Brian (Eitan Shalmon) who alerts them that the college dorms have been sectioned off by the police and that they aren’t to move from their rooms. As the film goes on, it explains that the Social RedRoom is spreading a virus via a nefarious bit of hidden coding designed to make the website more addictive. During a video recording towards the end of the film, a worker on the social site reveals that they have been sending subliminal messaging out to users to make them update more often but that very morning, the coding went crazy and into its own survival mode, making those using the site turn into zombie monsters.

As with all good horror film formulas, each of the characters are picked off one by one but what makes Antisocial even more horrifying is that it is an unseen presence, something that cannot be controlled. Already, practically the whole house has the coding in their heads, that will, in the end make them turn. The best parts of the film are those involving the social media angle; people saying goodbye when they know they are about to take a turn, the haunting scenes where those who have been killed are connected to the site itself or the tension that the audience feel when they work it out and find themselves shouting at the characters to GET AWAY FROM THE LAPTOP!

What Antisocial does is what Stephen King tried to do with The Cell but unfortunately failed, it is what Danny Boyle did to give a lease of life to zombies in 28 Days Later; it takes a contemporary fad and points 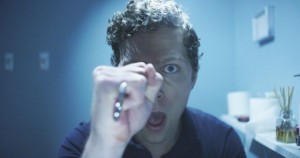 out the worst possible scenario concerning it. The strengths of the film do outweigh the weaknesses; but unfortunately, whilst the vast majority of the film is interested in creating suspense and intrigue concerning social media, the final section abandons this a little in search for a more traditional horrorsome ending. Some may also suggest that acting itself is quite weak but in fact, it works perfectly with this kind of film. A film, made for the audience that are the same age of the characters; they talk and move in the same way and this makes the film completely understandable and relatable.

Antisocial is an impressively executed, chilling, contemporary zombie drama, which utilises a great traditional horror trait to embody something completely new, involving and important to discuss. It is suspenseful throughout and builds a magnificent sense fear and impending doom.