We Are What We Are Review
Home
FestivalsA - HCambridge Film Festival

We Are What We Are Review 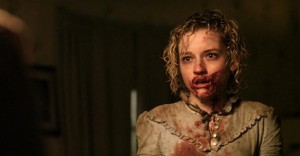 Jim Mickle’s English language remake of 2010’s Somos lo que hay, proves that even the most horrifying and bloody of thrillers can be beautifully shot and artfully executed. We Are What We Are follows the often claustrophobic and suffocating atmosphere of the Parker family; Frank (a bloodcurdling performance by Bill Sage), Rose (a fresh faced Julia Garner), Iris (Ambyr Childers) and Rory (Jack Gore). Mickle lights up the screen from the start of the film, with the most beautiful of landscapes; he clearly admires the locations of the film and treats them fairly on screen, exploring them for the audience.

The story starts with heavy rain, a clever motif often noted as pathetic fallacy, where the way in which the location feel & look and the weather mirror the narrative and the emotions of the characters. Mother, Emma leaves her house to fight against the flood outside to buy supplies for her family but something is wrong, she keeps peering off into the distance and starts bleeding uncontrollably from the mouth. There is no use hiding the fact that she dies at the start of the film. But by removing the mother figure from the family almost instantly, it falls upon daughters Rose & Iris to take over and start to look after their father and younger brother. The audience can tell almost instantly, this is going to be an arthouse horror, often referencing the beauty of European horror. The colours are damp and dark and yet the redness of the blood from Emma’s mouth is devastatingly beautiful, much like the rest of the film. But this is where the story really begins.

Whilst the local doctor in the village performs his autopsy on Emma, the Parkers have to get back to some form of normality. But their normality is very 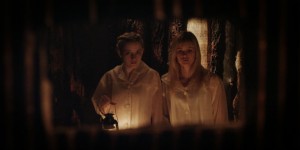 different to the rest of the world; they are spending that weekend fasting, getting ready for their big meal on the Sunday evening. The only tension in this fasting is when Rory complains that he is hungry and suddenly is taken ill because his father really won’t let him eat. The first half of the film focuses much more on creating this intense tension between the members of the family but also explaining how cut off they are from the rest of the village. Furthermore, Mickle also gives us flashbacks to a family with nothing to eat – this story is being told through the readings of Iris & Rose and ends up explaining a huge amount about the Parkers because this is their own personal history.

The doctor completes his work on Emma and closes the case but when he finds a bone in the stream beside his house, he starts to question where this came from, especially due to the spate of missing girls in the area (including his own daughter years before). He starts to gather momentum in his research and even gets the new police deputy on his side, Anders (Wyatt Russell). When they find more bones along the stream that goes through the Parker’s land, they start to question where these all came from.

Alongside this, another girl has gone missing and it isn’t until half way through the film that Rory is walking around his house and goes down into the basement where he has been forbidden to go – he hears a young woman’s cries, he screams and thinks it is a monster in the house. Well, there is the answer for the missing girl. Plenty of questions are asked during the first half of the film, with very little resolution. These woes of the family are backed up by Rose’s constant cry that they aren’t normal or like the others – but ultimately, she just wants to be normal.

It is during the monstrous and powerhouse second half of the film that the story really comes together; Mickle moves away from the stunning surroundings and moves towards explaining the narrative he has set up. His camera becomes much more personal, with more closeups to the characters and he stays on them just a little bit longer than what is usually considered comfortable. When the audience learn of the cannibalistic nature of the Parker family, that is when everything changes and the audience are suddenly put in a very tense position – do they look down upon the family for this tradition or do they want the girls to get free from this torture they have to go through themselves?

We Are What We Are has a amazing sense of the American gothic, something few films manage to really understand. The chilling second act of the film 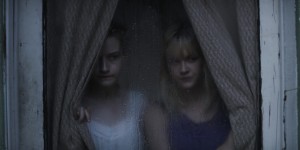 has a much faster pace, but doesn’t feel out of touch with the rest of the film. The relationships between the characters start to become much stronger, like that between Anders & Iris. One of the most compelling scenes is when Iris takes Anders out to a family graveyard in the middle of the woods, she has a knife on her and leads the audience to believe he is going to die by her hand because he is getting too close to finding out their secret but instead Iris gives in to her own animal instances and she starts to realise her own sexuality – the scenes blossoms to a bloody ending.

The final climax of the film is a stunning set piece, which causes the audience to scream out in shock but also really understand the motivations of the characters. At their heart, the teenage girls want a normal life and they want to get away from their mentally abusive father. Whilst this is represented in film so often, it is the clever way in which We Are What We Are deals with it that proves the power and pull of the film.

Whilst We Are What We Are has a slow first half, it expertly and beautifully sets up the characters and an intense tension that gets under the skin of the audience. The second half quite literally rips everything to shreds, with outstanding performances from Julie Garner & Bill Sage.