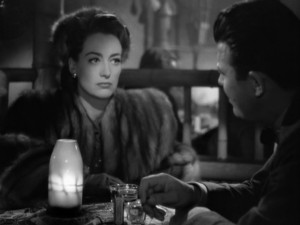 Though Faye Dunaway’s performance as Joan Crawford in the scathing Mommie Dearest has largely informed modern opinion of Crawford, reducing her to a manic laughing stock, the actress had a significantly different cultural milieu during her acting career. A beloved star, whose career spanned five decades and over a hundred acting credits, Crawford was one of the biggest names in Hollywood’s golden age. As a star of such indescribable gravitas, it is often difficult to separate Crawford herself from the films she appeared in. This is certainly evident in the great selection of special features available on the new Blu-ray of Mildred Pierce, which all tie-back to Crawford’s persona. The film, which won Crawford her first and only Oscar, is hugely engaging and wildly entertaining murder mystery, and features an excellent audio/visual presentation courtesy of the Criterion Collection.

The film, directed by the excellent Michael Curtiz, begins with a murder and near-suicide, firmly establishing itself as a melodrama. However, the film actually manages to blend genres together, and Mildred Pierce offers the best of melodrama, the woman’s film and film noir. Crawford stars as the titular character, a single mother who becomes incredibly determined to deliver a life free of economic hardship to her two children. Mildred’s journey from lowly waitress to ruler of a large restaurant empire is entertainingly construed, always keeping Mildred’s desire to provide as the key motivation in her life. Curtiz employs a rapid pace from the outset, and to its benefit, it never slows down. Cleverly framed as a murder mystery, the film actually is more of an exploration of the mother-daughter dynamic than a whodunit.

Crawford is nothing short of tremendous in the lead role. She perfectly balances a dogged determination to provide for her family with a striking vulnerability. This is never more evident than when the film investigates the relationship between Mildred and her eldest daughter Veda (Ann Blyth). Blyth is positively diabolical as Mildred’s spoiled daughter, who is so obsessed with class and vanity that refuses to respect her mother for her chosen trade. The key moments with Blyth and Crawford crackle on screen, as their sort of rivalry plays out with remarkable ferocity.

Despite great performances all around, the film always comes back to Crawford. An indomitable star, she is every bit as 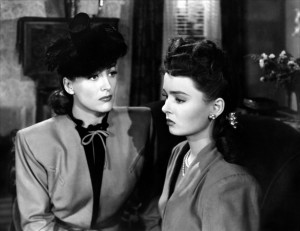 fascinating as Mildred Pierce as she is off the screen. The Criterion disc certainly plays up to this, with almost all of the special features focusing on Crawford as an actress, as well as her greater persona. Most valuable is the compelling feature-length documentary Joan Crawford: The Ultimate Movie Star. The 2002 documentary goes through Crawford’s entire career, from her beginnings as a lowly silent film actress to her glorious rise, all the way to her final film, the disastrous sci-fi Trog. Narrated by Angelica Houston and featuring talking heads ranging from Crawford’s co-stars to her own daughter, it crafts a tale every bit as interesting as the actress herself. Other highlights include an excerpt of The David Frost Show featuring Crawford from 1970, a Q&A with Ann Blyth from 2006, and an informative conversation between film scholars Molly Haskell and Robert Polito about the film.

With a terrific audio/visual treatment, a compelling story and one of the all-time great performances in film, Mildred Pierce is an absolute must-own.