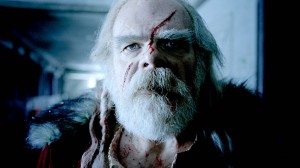 Like all great genres, they are sometimes even better when they are mashed up together; the rom-com, the existential thriller, the psychological drama and of course the Christmas (for this to work, you need to agree that Christmas films are their own genre) horror film . The fear and fright of the Christmas season has long kept people awake all the way through December; the presents to buy, the food to cook, what television shows to watch and is it really worth throwing yourself into Boxing Day sales? Go back a touch further and the German folklore legend, Krampus punishes children during the Christmas season who have misbehaved. So Christmas and horror in a film together should work?

Well, Grant Harvey, Steven Hoban and Brett Sullivan (who previously worked on the Ginger Snaps films) have done just that with the hilarious, scary and pretty bloody collection of interwoven short stories in A Christmas Horror Story. Four chapters that take place over one evening interlinked with William Shatner as Dangerous Dan, a radio presenter trying to keep the spirit of Christmas alive without giving into his eggnog… well I’m sold!

During one of the stories a family crosses into private land to bring home a proper Christmas tree. Scott (Adrian Holmes) and his young son, Will (Orion 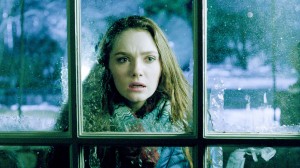 John) can’t see the harm in ignoring the signs but Kim (Oluniké Adeliyi) knows that there is more to this than meets the eye. What they don’t bargain on is that they would come home with far more than a Christmas tree as Will disappears and his replacement is a little on the murderer side. The second story also concerns a family – Aunt Edda (Corinne Conley) has a secret and when her selfish, self absorbed nephew turns up with his family in tow she is frankly having none of it. After an ornament is knocked off the side of a cabinet, Edda banishes the family from her mansion and sends them home. The sparring family have motor trouble, break down in the middle of the woods and whilst lost in the darkness they hear a noise – a punishment is on its way to deal with them.

The third story follows a group of teenagers as they try to figure out what happen to their school friends who were murdered beneath the school last Christmas. They decide that they will do an investigative report as part of their school project, break into the school and get locked in the maze beneath as the spirits and demons come out to play with them. It is a touch Scream and a touch Insidious. The final story takes place at Santa’s workshop where Santa (George Buza) is busy working away, going over his plans for the Christmas Eve ahead whilst his elves bring together the final presents and get his sack of gifts ready. But when one of the elves happens to get infected with some kind of mutant bacteria, he realises this isn’t going to be a normal Christmas as he is going to have to destroy his entire elf population as they soon all become killer zombies – what an inconvenience.

The stories intertwine seamlessly and Shatner’s jingly monologues help tie the whole film together, leading to the great Christmassy twist. Often bloody, violent and frankly astonishing, A Christmas Horror Story is probably going to work best for those who like their films to have a tongue firmly placed in the cheek but this is certainly one to bring the whole family together during the festival season!