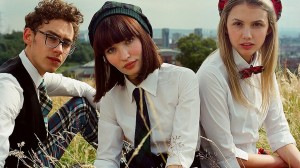 Stuart Murdoch, otherwise known for his work with indie band, Belle & Sebastian, has expertly crafted one of the most enjoyable and encouraging films of the year. In a debut screenwriter and director credit, Murdoch brings together a great and intellectual knowledge of music as well as the ability to create believable and often loveable characters in God Help The Girl. This side project, which started as a musical endeavour a number of years ago has grown into this wonderful indie musical drama, featuring some of the faces in a new wave of what can only be described as the British alternative to mumblecore.

Set in Glasgow, God Help The Girl follows Eve (the beautiful Emily Browning) who escapes from hospital where she is dealing with emotional issues and an eating disorder. She escapes because of her love of music and all she wants to do is attend a concert, with people her own age and get involved in their delicate and twisted lives. Whilst there, she bumps into James (Olly Alexander), a musician who wants more than his current lot. He feels under appreciated and misunderstood but there is something about Eve that captures his attention and whilst most people pale in his eyes, this mysterious and quiet girl seems to embody something he wants to tap into. The third and final character in this jolly gang is Cassie (played by the always brilliant Hannah Murray), who may be playing a character with the same name as her character in Skins that made her popular, but this Cassie is far more on the ball and aware of what she wants and when she wants it.

These three just happen to ultimately bump into one another at the right point in their lives; they need each other to get through this dream like and life changing Summer. As with all great coming of age tales, God Help The Girl is subtle and relishes in the moods of it’s characters as a narrative drive. These three misfits all have a love for music, it takes them away from the mundaneness of their lives and reminds them that there is really something bigger out there for them. Coming together to bask in each other’s talent, the three decide to create a band, something for themselves to only show off when they really feel ready but gradually they push one another into a new and exciting chapter in their lives.

But of course there is one vital ingredient that holds God Help The Girl above the rest; in this new wave of independent and realist cinema focusing on 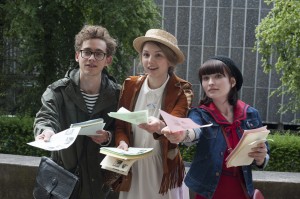 younger characters, many coming of age films do try to understand the emotions of its characters but this one in particular has an intriguing and fascinating way to get in there and burrow deeply within the mind; it’s music. Murdoch provides an outstanding list of songs, which vary from the comical to the dramatic, the sad to the uplifting but they wonderfully allow the audience another chance to enter the psyche’s of the characters and truly understand how they are feeling. The music, unlike a lot of a contemporary musicals, also helps to push the narrative of the film on by allowing the characters a chance to sing about something they possibly wouldn’t feel comfortable saying if they were talking.

What also makes God Help The Girl so special is the love it clearly has for its location; Glasgow, which seems so beautiful and sparkly in the lights of the film. The city has clearly become a character in its own right and without it, it would feel like something major was missing. They wander around the city like a playground, where they are free to find new and interesting things to play with. Furthermore, the chemistry between the central three is spectacular, especially between Browning, who does a touching and grand performance as a young woman learning to deal with her own well being and Alexander, who although smitten and unsure in his own life is charming to watch on screen.

God Help The Girl is easily one of the best British films of the year and will hopefully be remembered lovingly by all those that watch.