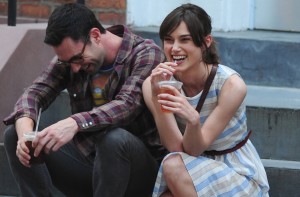 From the mind that brought us Once, Begin Again is a sweet, funny and fabulous musical romantic comedy about finding yourself in places you could never have imagined. Featuring an all star cast of Keira Knightley, Mark Ruffalo, Adam Levine (from Maroon 5), Hailee Steinfeld, James Corden, Mos Def and Catherine Keener, this is a film with a real feel good factor that doesn’t feel sickening.

Gretta (Knightley) and Dave (Levine) are a couple, completely and utterly in love – they write music together, sing together and generally look as sweet as can be but when Dave’s music career starts to rocket, the pair move from their cosy flat in England to a New York City pad (paid for by Dave’s label). Of course, this development can only mean terrible things for their relationship and one night after returning from a tour where he didn’t take Gretta (instead she has been left to wander a city where she only knows one person, her friend Steve (Corden)) he plays a new song to her. She hears in the lyrics (a way the couple find themselves communicating with each other) that he has written a love song but she knows it isn’t for her but instead one of the women at the label. Her instant reaction is to slap him in a striking sense of drama, which shows a slightly more serious side to Knightley.

Alone, sad and with no where to turn, she stays with Steve before deciding to return back home but on the night before she is 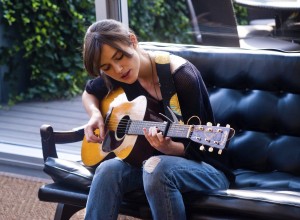 meant to leave, she sings an original song in a bar. As fate would have it, she wasn’t meant to be returning home just yet because she meets Dan (Mark Ruffalo), a down and out recently fired label exec. His relationship with his daughter, Violet (Steinfeld) is strained at best and his ex-wife Miriam (Keener) doesn’t want him in the house. His co-founder of his record company, Saul (Def) has decided to push him out after only ‘discovering’ terrible records of late that have made no money. Everything seems a little shit for Dan – he lives in a crummy studio flat, falls asleep with a bottle of some form of alcohol and has no one to turn to. So lo and behold on a night when two persons are at rock bottom, they meet and sparks fly.

What is nice about Begin Again is the feeling that the audience aren’t being treated necessarily to a straight forward, by the number romance, which is where this could have very quickly gone but instead is a story about two people finding themselves in the world and needing to know they are needed. Dan persuades Gretta to stick around and allow him to produce an album for her. Their plan is to create a different song outside in different areas of the city, which is always a brilliant way for the filmmaker to use the location as a character in itself. In this case, director, John Carney has done a fine job taking the audience on a jaunt around the city and allowing them to fall in love with the places that the characters find themselves. They find music wherever they go, which really allows for a great collaboration to take place. 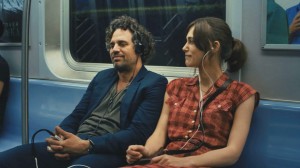 Along the way, the other characters including Dan’s family find themselves caught up in the magic and love of the story, which helps bring them back together but as new people. Gretta discovers more about Dave as he crawls back to her after he realises how good he had it and it is at this point for Gretta to decide what type of person she has become. The music in Begin Again is also great; love songs, upbeat jives and everything in between – allowing both Knightley and Levine a great chance to show off their musical talent.

Passionate and beautiful, leaving you with a big smile on your face, Begin Again is fresh and relatable making the audience feel at home and comfortable with the characters.