FrightFest 2013: No One Lives Review 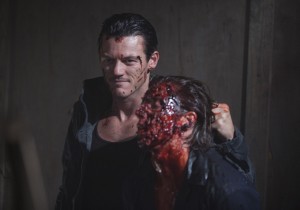 No One Lives tells one of those stories where the filmmaker does all they can to pull the rug out from under the audience; just when you think you understand what is going on, a twist in the story ensures you find yourself back in a land of confusion. Luke Evans stars as ‘Driver’ (not to be confused with Ryan Gosling’s role of the same name); a quiet, sensitive guy who is hiding a whole load of secrets that ultimately change the direction of No One Lives.

Director, Ryûhei Kitamura (The Midnight Meat Train) is back with an intelligent, chilling and darkly comic story of what happens when nothing is what it seems. When a group of highway robbers and killers, led by Hoag (Lee Tergesen) find themselves in a bar after a robbery went bloodily wrong, they were to never expect what would happen when they encountered Driver (Evans) and his girlfriend. Whilst Flynn (a twisted Derek Magyar) decides that he wants to have a play this evening, he starts to flirt with Driver’s girlfriend and angers the seemingly unemotional boyfriend without realising he is about to start a night of catastrophic events. 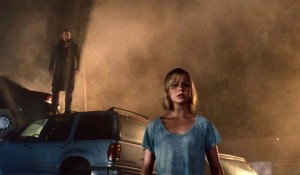 During the introduction of the film, the audience are also made aware of a another storyline running parallel to our own; a young girl, Emma (Adelaide Clemens), heir to some business or other has gone missing and the police are hot on the trail of those who took her. This is the first clever element of No One Lives; the audience are constantly guessing what the stories have to do with each other and who really took her. Was it Driver and his girlfriend or was it (and more obviously) the bunch of seemingly murderous crooks? It seems almost instantly the film does what it can to change expectations of the audience and perhaps even briefly hints of subversion of what one expects to happen throughout.

When Flynn decides that he wants to hijack Driver and steal his car, he enlists Ethan (George Murdoch) to help him engage in the torture of the couple but the story turns darker very quickly when Driver’s girlfriend decides to kill herself and throw herself on Ethan’s knife. This is the boiling point for Driver as he quickly turns nasty and the real side of him comes out. We quickly learn that Driver is certainly not who we thought the whole way along, quickly escapes his own cuffs, manages to overcome a very large man and ultimately kill him.

Whilst at the crooks house, they learn that Emma (the captured girl) has been stuck in Driver’s car the entire time (now things start to 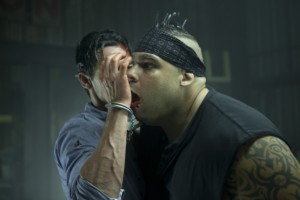 come together). So Driver is evil and the crooks have done him wrong; talk about a bad case of karma?

A horrified Emma explains very quickly that they have angered the wrong person; she tells them all right there and then that none of them will get out alive and here starts the thrilling main section of the film.

No One Lives is a beautiful looking film, boldly coloured with carefully textured sound; whoever realised murder could be so nice to watch? The film contains possibly the best hiding place in the history of cinema and does one better than Hannibal. Driver is physically brought to the crooks compound by themselves after he hides into the dead carcass of Ethan – in what is a stunning closeup, the dead body miraculously rises from the dead before falling apart and revealing a bloody, gore covered Driver, completely soaked in the darkest and deepest of reds. He looks directly into the eyes of the audience and for just a brief moment, you forget there is a screen dividing you and feel his is staring out at you, ready to pounce.

Furthermore the film has other examples of incredible technical skill; during the sequence in the dump towards the end, Driver is lit standing behind the characters on a top of another car. It may not be Orson Welles use of depth (see Citizen Kane) but it is certainly a wonderful feat and something that duly adds to the scenes. The depth of field is extended hugely by having him stand so far behind the main action but it also represents his menace as he looks over everyone; he is off the highest status and the audience are being told so. Furthermore, the audience are being told that he may be the only character to survive (the film pretty much does try and go by it’s title). 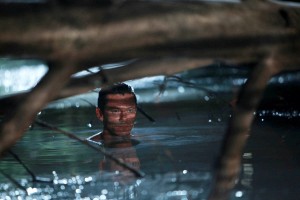 In amongst the bloodshed and anarchy, there are also simply delicious flashbacks to when Emma was first captured by Driver. He explains to her that she is going to save him if she wants to survive and without explaining, cuts himself with a dagger across the neck. Had she tried to escape and succeeded, he would have died and she may have gotten away. But the flashbacks (alongside her own present narrative) explain that she didn’t know any different and that she did, in the end, choose him and help. The greatest twist (somewhat Saw reminiscent) is that Driver explains to her, the door wasn’t locked and she could have simply walked away but she never considered it; in other words, he had gotten inside her head and her only hope.

This is what No One Lives tires to do to the audience throughout; get inside their heads and get them to try and understand Driver. Evans is simply brilliant – whilst at times he appears a little wooden, it seems to suit this character down to the ground. He is at once trying to get the audience to understand his brilliance but also scare and alienate them.

No One Lives is a gory bloodbath of the most beautiful proportions – jumpy and fun, it certainly is one to catch.