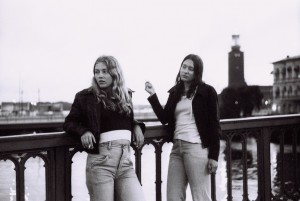 Mikael Marcimain’s Call Girl is a sleek affair based on an underage-prostitution scandal that took place in Stockholm in the 1970s. Our protagonist is Iris (Sofia Karemyr), a brooding 14-year-old runaway who has been placed in a juvenile home, and catches the eye of procuress Dagmar (Pernilla August). Iris and her friend Sonya get coerced into sleeping with clients from high society; civil servants, government ministers and businessmen.

Dagmar is creepily affectionate towards them – she sees them as younger and more desirable versions of herself – but she turns on them quickly. One minute they are giggling over the cash in their hands, the next they are realising the sinister circle they have entered. The film flicks between the vulnerable and the exploiters. It would be an absorbing and gritty drama were it not for the clichéd conspiracy thriller sub-plot. It’s the election year of 1976, stakes are high, and the guilty will not hesitate to use their power against the police who are ready to expose them. Policeman John (Simon J. Berger) gets caught up in the middle of it all.

The issue with this is that, although there is plenty of substance here to go at, the style suffocates it to an irritating degree. It looks impressive;  Marcimain’s work as second-unit director on ‘Tinker, Tailor, Soldier, Spy’ is staring us in the face. It’s a retro ‘70s visual feast; all flares, fags and platform shoes. But the soundtrack is far too ‘Drive’ which feels rather try hard and incongruous to the era. Call Girl, at times, is risk of glorifying prostitution by making it seem edgy and stylish. The music is constantly seeking to build tension, when it need not bother. It wouldn’t have hurt to focus more on the superior plot of the young girls and the ordeal they are going through. Iris remains a sort of young, feminine Ryan Gosling character. She’s too aloof and reserved, and consequently underdeveloped and a bit dull. Of course she had to be this way for the sort of movie Call Girl wants to be, but if it stopped trying to be so cool, it might have hit harder.