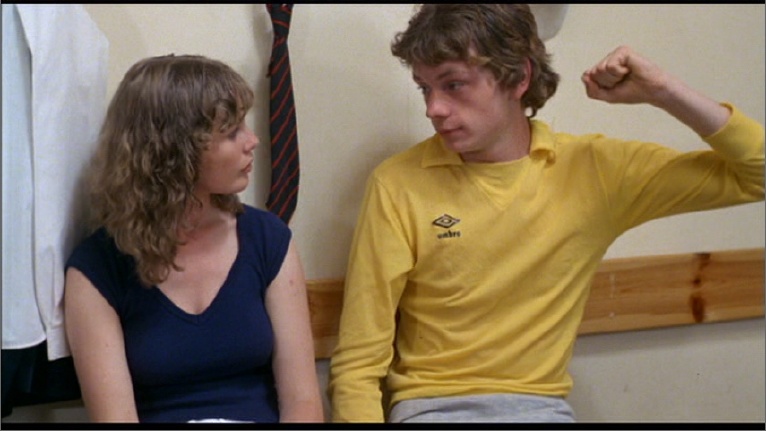 Rumour has it that Bill Forsyth is currently working on a new film. And if you haven’t heard of the Scottish director Gregory’s Girl is a perfect place to start. This was Forsyth’s second film and it quite rightly pushed him into the limelight and established him as an important figure in the landscape of British cinema.

The film concerns the teenage Gregory (John Gordon Sinclair) who is facing the perils of youth and young manhood. Principle among these are: 1) that he’s finding it increasingly hard to care about his position on the football team and 2) that a gorgeous and athletic girl named Dorothy (Dee Hepburn) has taken his spot as striker demoting him to goal-keeper. And he’s fallen in love with her.

The film opens with a wonderful scene, in which Gregory and his friends – a bunch of characters that you’ll love spending time with – hide in some woods to spy on a nurse, getting their first glimpses of nudity (an event which one of them recurrently confesses to having “terrific” dreams about through the rest of the film). This opening scene perfectly demonstrates Forsyth’s talent and vision: it’s simple, honest, charming, innocently cheeky, and oh so British.

The young cast, who incredibly well directed by Forsyth, came mainly from the National Theatre and the lack of acting experience does wonders for the characterisation. Both Sinclair and Hepburn are magnetic, but the supporting cast fill out the movie with life: from Gregory’s best friend Steve (William Greenlees), and second-best friend Andy (Robert Buchanan) both of whom are hilariously hapless

when it comes to romance, to Phil Menzies (Jake D’Arcy) the football coach who has to learn to overcome his confusion at a female presence on the field. Most notable among these, however, is Gregory’s 10-year-old sister Madeline (Allison Forster). Madeline is the movies brains and heart, a formidable yet sweet pedagogue teaching her gawky brother about girls and life.

Gregory’s Girl may not be what you’d describe as laugh-out-loud (in fact I can’t particularly think of any specific jokes of the top of my head…), but the film simply exudes warmth and you will be smiling from beginning to the end. Not only does the film demonstrate Forstyth’s already highly accomplished film-making talent, but it’s a coming-of-age film that is both endearing and kind-hearted – something that is all too rare these days. In this contemporary world of Mean Girls and Superbad (both, of course, modern classics) Gregory’s Girl may seem quaint, but perhaps we occasionally need to spend a bit of time in a world free of characters bitching about each other and announcing their crass lusts.

This coming-of-age comedy is an important part of British heritage and though Bill Forsyth went on to make bigger films, he created an early humble masterpiece in this endlessly engaging tale of innocent teenage discovery. Gregory’s Girl is warm, insightful and funny – it will touch the heart of anyone who’s loved and lost and loved again, all before the age of 16.