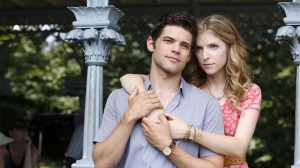 Musicals are back. After Les Miserables and Into The Woods hitting our screens and with Miss Saigon, Wicked, and Spring Awakening films in pre-production you’d almost miss The Last Five Years being released. And this is a musical you really shoudn’t miss.

The Last Five Years is Jason Robert Brown’s third musical and revolves around a collection of sung vignettes from the five year relationship between writer Jamie and actress Cathy. The twist to the narrative is that we not only alternate between Jamie and Cathy’s viewpoints from song to song but also follow Jamie going forwards in time while Cathy starts at the end of the relationship and works her way backwards to their first date. The stage show is conceptually just a sequence of solos with one duet in the middle when their timelines meet for their wedding and a pseudo-duet at the bittersweet end.

For such an abstract concept, Richard LaGravenese (PS I Love You) deftly brings the narrative into the real world and manages to intelligently allow the viewer to constantly know at what point in the relationship the current vignette sits, even managing to weave both characters into certain songs by giving brief dialogue and reactions to the non-focal character. There are no huge chorus numbers or 10 minute dance breaks, this is one of the most unmusical musicals you’ll ever see. Arguably the hardest part of putting a musical on screen is dealing with characters suddenly breaking into song, fantastic shows like The Producers are examples not to follow when it comes to film adaptations. Thankfully, strong direction and good performances by actors who are both experienced in stage and screen make that break seamless and natural.

The film opens with Cathy coming home to find that Jamie has left her and singing the beautifully haunting “Still Hurting”. While this makes for an interestingly fatalistic opening it is quite a slow start and its poignancy only comes through on subsequent viewings where context for the tragedy of the situation is more apparent to the audience. Things greatly change in the second vignette where Jamie sings “Shiksha Goddess”, a song where he comically regales Cathy about how happy he is to not be dating yet another Jewish princess. 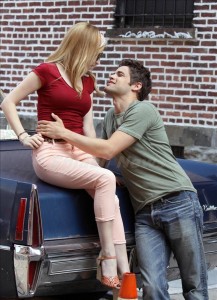 film while the middle is more consistent since the two characters are closer in the timeline to each other and are thus more emotionally similar. The eclectic pacing is made to work for the film instead of against it, no emotion is drawn out for too long and the audience can find themselves crying with laughter one minute and brushing a sad tear off their cheek the next.

The lack of confusion in the pacing is achieved in no small part by the score itself. There are two main styles of music throughout the film: a slow piano and strings powerchord heavy style and a more upbeat guitar and jazz piano one. If you were to watch the vignettes chronologically the style would start with the latter and slowly transform into the former. While subtle the music gives the audience an emotional cue of what to expect in the coming vignette and thus greatly helps to set the tone.

Showing a relationship slowly breaking apart while not vilanising one of the characters is a tricky balancing act. Jamie is cocky and passionate and seems to jump from success to success when it comes to his career, taking it all for granted. Cathy, who is sensitive and insecure, has no such luck with her career and her frustration slowly bleeds into the relationship and doesn’t mix well with Jamie’s success. LaGravenese, for the most part, keeps a good balance between the two characters except for his interpretation of a reveal towards the end of the film that demonises one of the characters more than it did in the musical.

The cinematography is beautiful with varied yet faded colours. The film matches the intimacy of the musical by mainly using handheld closeups of the characters and by not being afraid to use longer shots, a welcome change from other musical films that feel more like music videos. There is no spectacle in this film, it is all about Jamie, Cathy, and their relationship and that focus visually really shows throughout and matches the narrative focus on intimacy.

This would not have been possible without the the fantastic and nuanced performances of our two leads. Anna Kendrick and Jeremy Jordan’s portrayals of Cathy and Jamie really shine throughout the film. Jeremy manages charming without being arrogant while Anna does sensitive without being whiney. Vocally Anna and Jeremy tackle a complex score with ease which is no surprise as they both started in theatre. It was an absolute delight watching two highly talented musical theatre performances do what they do best.

The Last Five Years skilfully takes you through the happy and tragic moments of an intricate relationship and explores those moments in ways that are easy to identify with. This very intimate film is backed-up by an intelligent score and some simple yet effective visuals. All this would amount to nothing it weren’t for the fantastic performances from both leads who really pull the whole film together. If you’ve ever had an amazing first date, a horrible breakup, or anything in between this film will resonate with you and is a refreshing musical that is more grounded in reality than spectacle.