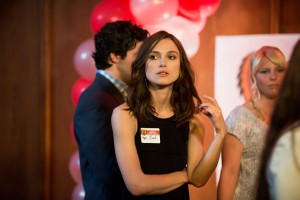 Megan (Knightley) is a grown up, at least that is what she tells herself. She currently lives with her high school sweetheart, finds her stuck up and uptight friends getting married and having babies around her, working at her dad’s firm as the sign girl and generally not doing what grown ups are meant to do. When her boyfriend, Anthony (Mark Webber) goes to propose to her at a friend’s wedding, everything suddenly comes crashing down. She feels the walls coming in as she is forced to be an adult, make decisions and step into the big bad world, but instead she bolts. Whilst on a little drive around town, she is asked by a group of high school students whether she can buy some alcohol for them – the pack is led by Annika (Moretz), a beautiful and intelligent girl, who has her head screwed firmly on. Megan decides to get them drinks and then proceeds to spend the rest of the night ‘hanging’ with them. It turns out this kid thing can be a lot of fun.

When Anthony unfolds his plan to Megan about the two of them eloping in Las Vegas if that is what she would rather do, she 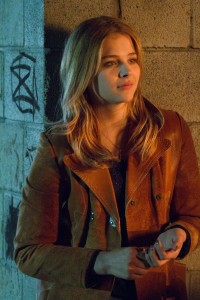 accepts and forces herself to believe that she can be happy. But she realises quickly that forcing happiness is never the key and that she needs some time to breath and take cover. Under the guise of going to a finding yourself convention, Megan calls in a favour from Annika and asks whether she can stay around her house. On the first very first night, she is discovered by Annika’s handsome bachelor father, Craig (Rockwell) who decides to find humour in the whole thing, whilst being wildly sarcastic. Megan explains that she is in between leases and needed somewhere to say – Annika is a friend and would it be okay to stay? Craig accepts the story and so starts a pretty obvious but enjoyable love story as the pair figure out their chemistry with one another.

Say When does try its hardest to talk about being an adult, and for the most part it succeeds – like for example when Annika decides that she wants to see her mother and takes Megan along for moral support, it is one of the most touching parts of the film. If anything, it is in fact Annika who is the most adult amongst the characters. Through her, Megan realises that she has choices to make and that is the first thing about begin an adult – she must decide on a path, whichever it is and stop shying away altogether. If Shelton wanted to make a film that debated the ins and outs of adulthood and forced Megan to make life changing decisions, Say When certainly isn’t that because pretty soon the whole life storyline is buried underneath sexual tension and intimacy between Megan and Craig, but hey a good love story never goes a miss either.

What does make Say When stand out from the rest are the brilliant performances; all three central characters have fantastic chemistry on screen and prove their own individual talent. There is never a moment when they outshine one another but instead have a brilliant balance, giving good screen time to all characters.

Bundles of fun, lots of laughs, kind and loving, Say When is feel good and fabulous.