The Fashion of God Help the Girl
Home
News

The Fashion of God Help the Girl

Vintage: a style revolution that has consumed the country over the past five years and has catapulted your grandmother’s clothes from drab to the height of chic. Today, it has become the norm to see people walking down the street sporting a flash of tartan, a pair of thick rimmed glasses or the odd boater hat. The world has gone pinafore crazy and so too has Stuart Murdoch’s new film God Help the Girl. Costume designer Denise Coombes left no button undone with the outfits of Emily Browning, Hannah Murray and Olly Alexander with their quirky style sense reflecting the vibrant Glaswegian indie pop music scene in which God Help the Girl is set. Sprinkled with berets and twee chequered shirts the costumes in this film encapsulate the retro dressing era.

To celebrate the UK release of GOD HELP THE GIRL in cinemas 22 August, we take a look at a few standout pieces from past decades that have crept their way into the film and back onto the high streets. 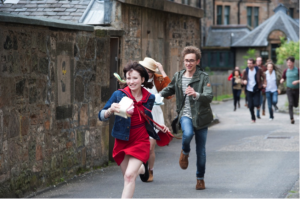 An item that used to be solely for the English school boy in the 1950’s and 60’s, the satchel has now become the key indie pop accessory.  Functionality is no longer trumped by fashion and now this quintessentially British accessory is no longer just for school kids. Wandering the streets of Glasgow Eve (Emily Browning) hardly puts her miniature satchel down and more and more people have been following suit. 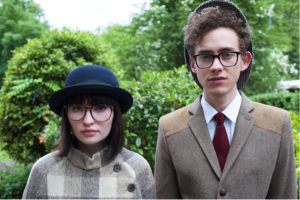 In the era of 1920’s silent cinema Charlie Chaplin made the bowler hat iconic as part of his Tramp character, then in the 1950’s and 60’s it was part of theuniform for workers in the City of London and now in 2014 we have repurposed the bowler hat once more.  No longer is it just a masculine accessory, instead more girls are wearing them than guys, with Eve being one of them in God Help the Girl. 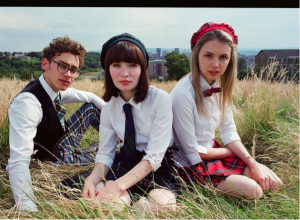 impractical. However, the 1920’s saw their use change completely; suddenly adopted as golf wear tartan trousers were all the rage. With their recent heritage stemming from golf it is no wonder that this fashion has been welcomed into the preppy fashion family. James (Olly Alexander) with his thick rimmed glasses verges on the border between preppy and indie pop culture and so tartan trousers were perfect for him but they are not just for guys, flooding the high street for girls this autumn. 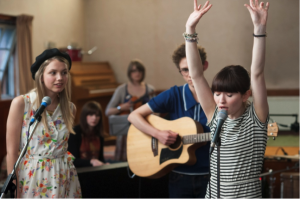 Cassie (Hannah Murray) have left Audrey’s classic black behind, favouring shift dresses in shades of mustard and baby pink, especially for their performances. With the addition of the odd garish floral pattern here and there, the hippie era of the late 1960’s has undoubtedly influenced their fashion and provided a little bit of escapism, just like the escapism they find in music.