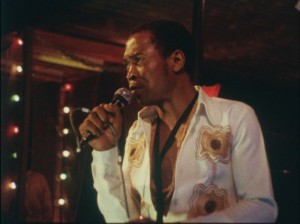 “Music is a weapon” is the theme that runs throughout this intriguing documentary on the legendary Afrobeat Nigerian activist Fela Kuti, a documentary that will probably invite comparisons to Kevin MacDonald’s excellent Marley (2012) (there are in fact many similarities between Bob Marley and Fela Kuti in terms of both political activism, their treatment of women and their children and  their tragic early deaths). Critically acclaimed documentarian Alex Gibney (We Steal Secrets: The Story of WikiLeaks, The Armstrong Lie), provides us with lots of interesting rare footage and great talking heads with friends, associates, fans and family of Fela including Rikki Stein (Fela’s former manager), Tony Allen, Paul McCartney and Questlove.  Alongside documenting Fela’s life in parallel we see the inception of Fela! The Musical and the show’s run at Femi Kuti’s The New Afrika Shrine in Nigeria, with great footage of rehearsals and parts of the show. We also get a glimpse into how Bill T. Jones the choreographer and creative director managed to condense Fela’s radical life and music into an accessible format for those who may not have even heard of Fela before (and if you haven’t seen it, it really pulls it off and serves as a great representation of Fela).

The film gives us the context from which he emerged and formed his political consciousness. So we hear about his anti-colonial feminist mother Funmilayo, the first Nigerian woman to go to China who will play a massive part in Fela’s life, and learn that his father was a key figure in the Nigerian education system. And we hear about the part that spiritual (Fela was a school choir leader) and Yoruba music, alongside the influence of jazz and James Brown’s brand of soul had on his music. We also get a sense of the corruption of the Nigerian government with the Biafran War (1967-1970) fought over oil and thousands of people dying, neglected and unemployed. We also see footage of Nigeria’s poorest people walking through overcrowded dusty streets filled with rubbish and picking through scraps. And we are introduced to influential figures such as the flamboyant Sandra Izsadore, an American singer (and one of the most entertaining talking heads) who introduced Fela to Black Power and Malcom X’s autobiography, and encouraged him to write about political issues in his songs (when he had previously been singing about things like food).

Fela provided a voice for the people, and the first footage of him shows him preaching at the YMCA about the power of telling the truth 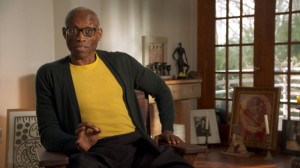 because “the truth will never die”, while concert footage shows him again talking to the people about the wrongdoings of the government. He was a man with a mission and he didn’t care how many beatings he received or how close he could come to dying, he was prepared to stay in Nigeria, stick his head above the parapet, run for president and face the consequences. And as you see Bill T. Jones and the musical’s producer Stephen Hendel debate whether he was plain crazy or a brave hero, the film indicates that he was probably both.

Some of the best parts of the film come from the accounts we get of Fela from his family, his children Yemi, Seun and Femi provide intimate, and at turns funny and poignant glimpses into the man behind the legend. Through them we learn about the complications of having over 27 wives, the fights that used to break out over entering Fela’s room for sex, and the chaos of living in Fela’s collective compound with so many people (Fela also having brought people off the streets of Nigeria as his employees). We hear in moving detail from an emotional Yemi the famous brutal raid on Fela’s compound after the success of the anti-government Zombie, with women covered in blood and Fela’s mother thrown off the second floor. An event that resulted in her death and Fela’s obsession with spiritualism in order to commune with Funmilayo, who was his political guide and moral compass.  And we also see Femi humorously recount his reluctance to get involved with his father’s dangerous antics such as when he decided to parade his mother’s coffin at the government’s HQ (“I pretended to be asleep”). And we learn that Fela’s love for the people meant that often the children received attention last, showing the complications within Fela and making for a more interesting portrait than if he was just painted as a hero. 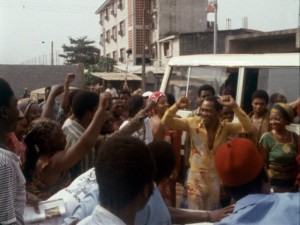 Gibney then is not afraid to also show the flip side to Fela’s obsessive political activism, the cost it had on his family and the fact that he was basically a misogynist who thought husbands could kick their “women’s arse” if they wanted to-as he says brazenly in interview footage. And who, as Tony Allen recounts, neglected to pay his musicians or give them due credit resulting in Africa 70’s disbandment. And who had as his associate a shaman con artist, Professor Hindu, who he naively believed gave him spiritual powers and who memorably enacted slitting someone’s throat in a London nightclub and who eventually landed Fela in jail. He was also someone who through his careless attitude towards sex ended up dying of AIDs at the age of 58 (the irony of it), all the while irresponsibly denying that it was affecting him and that his lesions were just him “growing new skin”.  A fact that Bill T. Jones, himself HIV positive, is visibly angry about and his cause of death is purposefully not included in the musical. 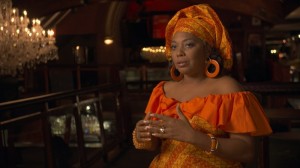 by about 1 million Nigerian people. As well as showing that he was clearly a genius when it came to creating a new kind of hypnotic, entrancing polyrhythmic music which made you dance, but was also a call to arms, which was spiritual and also earthly. While the footage of The Shrine made you wish that you could go back in time and experience the magnificent power and excitement of a Fela show. Music really is a weapon, and Fela as this engaging film shows was one of its best soldiers, long may he continue to inspire people.

To find out more information about the film, check out the official site here: FindingFela.co.uk