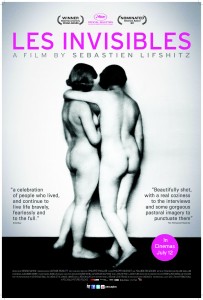 Having appeared out of competition at the Cannes Film Festival, Les Invisibles became associated with the heights of French cinema even before it screened commercially. The documentary by Sébastien Lifshitz, however, did far more than merely show at Cannes—it won the César, or French equivalent of the Oscar, for best documentary. This accomplishment rightfully belongs to Lifshitz and his team as his work frames a contentious issue, sexuality in general and homosexuality in particular, within powerfully moving, incredibly intimate, and heroically humanizing vignettes. Vignette may seem an odd description, but Lifshitz relies upon relatively fleeting sequences that reveal more about his subjects, all born between World War I and World War II, and his theme more than one would think possible. Moreover, Lifshitz relies upon these sequences to establish both a historic and contemporary context for this theme, an amazing accomplishment in its own right.

Even though his documentary spans seven vignettes involving 11 people, Lifshitz seamlessly blends them. He tells no completely linear story, instead preferring to repeatedly visit his subjects in an expertly chosen order that results in not a disjointed arch but an evocative, progressive one. Using stunning scenic shots worthy of any Malick film and classical music interludes, Lifshitz transitions nicely from one subject to another. Prior to any transition, however, he introduces the audience to Yann and Pierre.

Like the rest of the documentary participants, Yann and Pierre have interestingly varied life experiences. Yann had been raised as a devout Catholic; whereas, Pierre had not been wanted by his mother and subsequently found himself a ward of the state. The two found one another in quite a cinematically romantic way. Yann first spotted Pierre in his review mirror. Upon meeting moments later at the local dry cleaners, each revealed an interest in the other. While a lovely anchoring point, this encounter does not prove the most poignant part of their story together.

Yann and Pierre both discuss the hardships faced in their youths. Pierre describes the pressure to conform to heteronormative expectations in his working class, communist family. Yann admits to feeling as if he had lived in a kind of shadow, even as he speaks partially shaded by an overhanging canopy, his face half shaded. With this story, Lifshitz directly and symbolically addresses an issue that affects other documentary contributors and the LGBQT community today.

Like Yann and Pierre, Christian struggled with his homosexuality well into adulthood. Confessing that he lived in an atypically sheltered environment, Christian repressed his emotions well into his university years. Throwing himself into his faith, he hoped to quell the desires within him. After being outed by a photograph in a 1979 Paris Match article, Christian came to better understand and accept himself even if he then felt as if he had lost much of his youth. Again, Christian’s experiences parallel those of many today.

Lifshitz, however, examines more than merely trials of self-identity. He also highlights the conflict associated with political identity. Jacques, who describes his involvement with the Gay Liberation Movement, appears alongside Christian. Lifshitz intersperses historical footage of liberation protests and meetings with Jacques’ testimony. Doing so allows Lifshitz to explore the issue of equality, a process he continues with Monique.

Monique describes herself as a great seducer, one who took pleasure in women falling in love with her. As such, she never felt uncomfortable with her sexuality. She embraced it and discusses her experiences with such candour that one cannot be but amazed at her self-confidence. Seemingly, her only vulnerability lies in her aging. She confides that she felt slightly lost when she reached the age at which she could no longer attract a woman with her sensual figure alone, yet there is no dejection in this confession. Even in reshaping her identity, another theme of the documentary, she remains resolute. This self-assuredness aided her political activities, as she led lesbian rights rallies and organizations. Yet another subject, too, engaged in such political activity.

Thérèse married at a young age and devoted herself to her family. In her 40s, however, she became born again, as her daughter explains. Thérèse began having relationships with women, all of which she describes fondly, and advocated for women’s rights. She even operated a clandestine abortion clinic during the period in which France prohibited the practice. Perhaps most interestingly, Thérèse is the only subject whose family appears in the documentary. During one sequence, Lifshitz captures Thérèse and her daughter in convivial conversation. In another, he documents Thérèse and her extended family discussing sexuality, women’s and gay rights movements. This familial familiarity adds something wonderful to the film, as it further expands the boundaries of sexuality and family. Two last couples do something similar.

Cathérine and Elisabeth met while working at the same Parisian office. After falling in the love, the couple faced increasing hostilities from management. The couple eventually accepted a severance package, travelled the world and purchased a farm. The two still own and operate that farm and recount the difficulties they had establishing it. These difficulties, however, did not include prejudices from neighbours, who instead helped the couple to a great extent. Even though the couple jokes that neighbours likely thought the two were merely unmarried women who had their hearts broken, Lifshitz touches on the unexpected: bigotry in a cosmopolitan environment and acceptance in an agrarian one. This subtlety should not be overlooked, nor should that implied by another couple.

Bernard and Jacques provide a last example of affectionate storytelling. This couple explores not the trials that homosexuals must face but rather the overall fluidity and complexity of sexuality. Bernard has dated only older men, admitting that gray and white hair has always been appealing. Jacques only recently entered into a same-sex relationship. Living with his wife until the age of 71, Jacques only then wanted something different. Jacques explains that while with his wife and while raising his children, he never felt an overpowering attraction to men. The moment he did, Jacques confided in his wife. Now more a friend than a lover, she encouraged him to fulfil this emergent need, which Jacques did by answering Bernard’s personal advertisement. Tender toward one another and perhaps the comic relief of the documentary—Bernard and Jacques’ conversations mirror dialogue from 1970s family friendly situation comedies—the two introduce sexuality as unfixed and indeterminate. They do so, however, so effortlessly that one realizes just how much sexuality lacks a binary. A last participant further contributes to this position.

Pierrot, a goat farmer in provincial France, recounts his rebellion against sexual stereotype. As a child, he made shorts from his trousers against the explicit commands of his grandmother, an act of defiance rarely committed in early 20th century France. This self-determined streak remained, and Pierrot refused to deny himself any sexual pleasure he desired. Strolling along a riverbed near his farm, Pierrot admits to having affairs with both women and men along that river’s shores. Understandably, Pierrot sees sexuality not as limiting but limitless. For Pierrot, one may explore one’s preferences out of sheer desire without any explanation being needed, thus further supporting the claim that sexuality cannot be bounded by category. 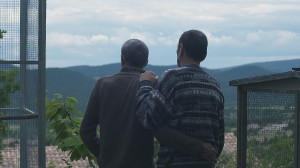 Lifshitz accomplishes something extraordinary with Les Invisibles. He does not only construct a well-crafted documentary, which flows easily from one story to the next. He also contributes to an on-going conversation about sexual identity, experience and rights. By chronicling the experiences of the inter-war born, Lifshitz draws on the cultural revolutions of the 1960s and 1970s to show how far French society has progressed. Simultaneously, he challenges his audience to evaluate that very progress. By making this film, Lifshitz builds upon previous documentaries that centred on the Stonewall Riots, Act Up and other watershed moments for gay rights. Lifshitz, however, does so with a light hand, choosing instead to allow his human-interest piece to convey the necessary emotion and knowledge in a way that actively engages the audience. Intelligently provocative and aesthetically stunning, Les Invisibles should not be missed.

Les Invisibles opens 12 July in the United Kingdom as a Peccadillo Pictures release.