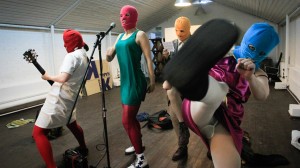 Of late, the moment a major event occurs there seems to be a rush to capitalise upon it by being the first to make the documentary about it. Mike Lerner & Maxim Pozdorovkin’s Pussy Riot doc joins a host of other pieces rushing to capture history while it is still in formation, Alex Gibney’s Wikileaks expose We Steal Secrets, Alison Klayman’s Ai Weiwei film Never Sorry, and Brian Knappenberger’s Anonymous doc We Are Legion. Such is the problem with recording history as it is being written, Pussy Riot – A Punk Prayer is serviceable as a up-to-the-minute social document, but could perhaps benefit with more insight by way of hindsight.

Lerner and Pozdorovkin cover the incident that led to the arrest of Pussy Riot, a girl punk-protest group arrested for their ‘performance’ at the alter of Moscow’s Cathedral of Christ the Saviour, as well as the antecedent trial and sentencing of the trio. They make grounds to speak with the families of the group, look a little into their upbringing and previous forays into activism (including an infamous display of biology in a biology museum that will make sense to those who’ve seen it) and probe slightly into how they got involved with performance protest punk. “Are you girls planning to rob a bank?” says one of their fathers, said tongue-in-cheek at the time about their Spring Breakers style neon balaclavas, but sobering now knowing the consequences. They possibly could have, and seen a similar sentence.

More interesting perhaps, is the attempt to contextualise the case, examining in simple terms Russia’s history in relation to the church performance. Lerner and Pozdorovkin aim to show the historical precedent of Pussy Riots’ objection to the conflation of Church and State, and why their staging of this objection upon the alter had such an impact, as well as why their implication of Putin’s wrongdoing has seen them face such a harsh reprimanding. They look too at public support for the governments sentencing, including a fascinatingly bizarre fundamentalist group ‘The Carriers of the Cross’ who talk of Pussy Riot as witches, whilst explaining that the direct translation of ‘pussy’ in Russian is ‘deranged vagina’. They look more like a black metal band than religious extremists, but add worrying colour to a mostly drab documentary.

There is some interesting footage of the performances that Pussy Riot managed without arrest, including the poignant inclusion of a song played to prisoners, encouraging closure of the prisons and freedom of the prisoners, playing over the closing credits. The majority of the film though, covers the court case that followed the February 2012 arrest. The filmmaker’s level of access is by far and away their greatest accolade. Lerner and Pozdorovkin are allowed to film within the court, recording most interestingly, the three Pussy Riot girls’ evocative closing statements. Even more candid is the footage of the caged girls shooting the breeze whilst waiting for the trial to reconvene, talking casually about their perception and representation in the media, and worrying about how they should make themselves look during photos. “Don’t smile at the press, they’ll say we were laughing at the trial.”

Lerner and Pozdorovkin must know that these court scenes are carrying their doc, as the footage makes a majority of the film, the attempts at backstory and history feeling rushed and uninteresting. Sensibly, the girls are left to speak for themselves, and they do so eloquently enough. Formally, the doc is a bit of a shambles. The disregard for aesthetics is understandable, the human rights issue is the focus, not anything visual, but a better structure would have made for a more compelling portrait. As it is, Pussy Riot – A Punk Prayer is worthwhile for its insight into the trial, but struggles to hone into anything of great insight outside of the courtroom.