Who Is Dayani Cristal? Review 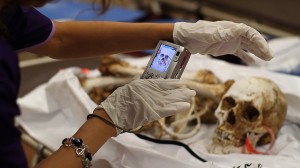 Marc Silver’s Who Is Dayani Cristal? is an interesting type of documentary; whilst it could be reprimanded for becoming a little too caught up in it’s main star, Gael García Bernal and swerving a little too much toward a Hollywood’ised version of the story it is trying to tell, it makes far more sense to realise that Silver has cleverly made this important and necessary story much more accessible to the common Joe in the audience. Whilst recently there has been an onslaught of films, which have used true stories as its basis to discuss emigration (The Golden Dream, Leave To Remain), Who Is Dayani Cristal? is the most recent high profile documentary, which looks at those in Central and South American as well as Mexico who are constantly everyday trying to find a better life for themselves and their families by crossing the border illegally into North America.

Diego Quemada-Diez’ recent debut epic, The Golden Dream follows a group of four Guatemalan children who travel to cross the border in the USA and his film is made up of stories from thousands of emigrants that he spoke with. Silver’s film looks into the world these people live in day-to-day and even pushes the audience to question what would be going on in their minds, pushing them to risk their lives to make more money. In this film, Silver and Bernal work together to try and discover who Dayani Cristal was – all that was known of the man whose body was found in the Arizona desert was that his tattoo across his chest said ‘Dayani Cristal’ – but was this his name and where did he come? Bernal follows the journey that this man took, to try and encounter the people he met along the way and get a small grasp of the world they are trying to escape. Interspersed with this choreographed and directed story telling is a variety of talking heads, which are ultimately telling two stories that will come together. One set of interviewees are from Central and South America, these are people who have or have tried to cross the border and their friends and families. The second story being told is ultimately from the other side of the border, from the patrolmen to mortuary to the official offices where law is discussed – this is where the stats are revealed and the audience are introduced to those who work on a daily basis to try and figure out where these missing men and women have gotten to and sometimes to bring their bodies home to their families.

Many hugely interesting and provocative points are raised during the film, especially from some of the American’s who are sitting in their high 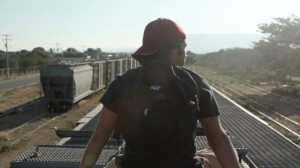 powered offices; at one point a office worker who tries to match bodies with families back at home says that North American’s are reluctant to accept the fact that the majority of the blue collar labour force in the USA has brown skin – these are men and women who have most probably crossed the border to send money back home and yet North American’s don’t see this. Later in the film a discussion begins, which is raised with several of the talking heads that the law must change at some point – at the moment the law doesn’t see these people are humans but instead what is simply legal and illegal, but the film certainly does raise questions around blurring this.

Bernal does a fine job charting the journey of one of these travellers; he speaks with various people that help along with the journey and he immerses himself into the life of one of these people. Obviously there is a sense of having to suspend one’s disbelief – quite how much isn’t shown on screen would also be interesting to see – at night, did Bernal and the crew go back to some sort of well to do hotel or did they also in find themselves living in the squalor as many of these people do?

Overall Who Is Dayani Cristal? quite possibly is not the best made or the most thought out documentary, but it is important, provocative, emotional and so so necessary – as long as people keep talking about these issues, as long as they are in our faces in whatever way possible, then perhaps one day it allows a discussion that things could potentially change. A touching documentary, which deserves to be watched and then shown to someone else.