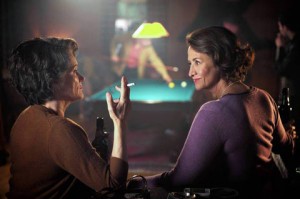 Margarethe von Trotta’s tale of real life Jewish philosopher, Hannah Arendt is a thrilling drama of a woman who is caught between what she believes and what others believe she should think. Starring the brilliant Barbara Sukowa as Arendt, this touching melodramatic interpretation of the events, which would gradually lead to the publication of Eichmann in Jerusalem: A Report on the Banality of Evil, is a beautifully acted and well shot period piece, which should be proudly added to the canon of World War II cinema.

Hannah Arendt introduces a whole variety of characters as well as the title character, including fellow friend and philosopher, Hans Jonas (Ulrich Noethen), The New Yorker editor, William Shawn (Nicholas Woodeson) and author, Mary McCarthy (played by the exquisite, Janet McTeer). The film introduces Hannah and her circle of friends; they teach, they write, they drink and smoke and best of all, they argue only wanting to further their own knowledge and those around them. Trotta has taken advantage of the achieve footage that was on offer and has used it sublimely; moving from her film to the footage and back without any notice. As the action of the film starts, through a news bulletin, the audience are told that Adolf Eichmann (a German Nazi SS officer) has been captured by Mossad, the Israeli intelligence service and they plan to try him in Jerusalem.

This instantly starts an important discussion and one of the themes that will ultimately carry on the way through, which 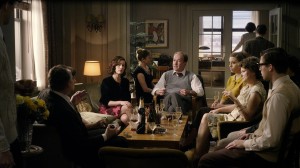 is the position of guilt and blame but also who should take lead in these proceedings. During one of Arendt’s get togethers, the group argue quite vehemently about where the trial should take place and why does it lay to the Israeli’s to take lead on the case? The party is split and it is important to note the mixture of German Jews amongst the group with native Americans as well as the British McCarthy. The audience are also briefly introduced to Hannah’s own story about escaping Nazi Germany along with her husband, Heinrich Blücher (Axel Milberg), when they were given a temporary visa to the USA. She emotionally explains the time and work it took to ensure their safety in this new paradise, as she recalls to her secretary.

Arendt then puts herself forward to The New Yorker editor, William Shawn, about going to Jerusalem to cover Eichmann’s trial and write them a piece, which none of them realise, would change all their lives forever. Whilst in Israel, she meets up with old friends and those who also escaped Nazi Germany and quickly enters intense discussions with them on the idea of blame. She listens intently to the trial and finds herself lost in her thoughts; in between thinking about her own upbringing and gradual escape alongside her realisation that Eichmann was simply following orders. Despite his morals or lack of therein, once he took the oath to follow Hitler, he simply was doing as he was told and this is the crux of Hannah’s argument – but no one wants to hear that, they want to hear the total blame that should be accounted towards Eichmann. 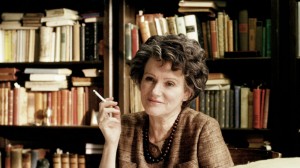 She further writes in the piece for The New Yorker about the guilt and blame that should be allotted to the Israeli’s and their government; she points the finger about their work with Germany and this further angers a lot of people.

What is simply wonderful about Hannah Arendt is that just as quickly as the story becomes about the trial of Adolf Eichmann, it returns back to the internal and external reflections of Arendt herself. The film is never meant to be an account of the war crimes or what happened to him in the end but rather what Hannah had to go through for writing what she believed. Her postulation of ‘the banality of evil’ is one of the most important ideas ever put forward and is still argued about to this very day. Trotta very carefully puts Hannah in the middle of her world and when the battle lines are drawn, it is very clear who is on which side.

The film is also a beautifully shot imagining of what happen to Hannah; the small confined spaces of the rooms in 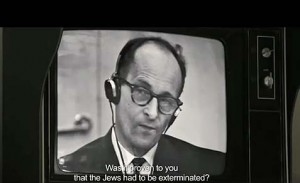 which the film finds itself in, is a lovely visual reminder of probably how Hannah felt nearly everyone around her leaving her side. The chemistry between both Sukowa and McTeer as best friends is some of the strongest and most telling of their characters in the film; they laugh together and they talk together and McCarthy follows Arendt through to the end.

Hannah Arendt is excellent, compelling and informative. If a little on the melodramatic side, it makes it much more audience friendly to those with little knowledge on the story and opens up a whole other side to World War films, which is rarely discussed.