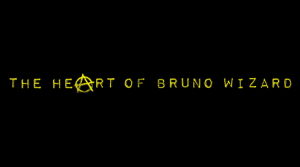 The Heart of Bruno Wizard opens with an older Bruno Wizard in full rock star mode performing his first concert in London since 1986. You can see the British punk vibes  from his youth still emanating through him as he is still absolutely loving and commanding the stage. This captures the spirit and persona of Bruno perfectly.

The next time you see Bruno he is in a much more subdued setting and is genuinely down to earth which you not expect since he’s been described as a mad man prior to this appearance. The more appropriate term to describe him with is with the word creative. He is someone who loves to create art which encompasses a whole number of things which are covered throughout the documentary alongside his unwavering ability to engage on a personal level with other people. His interactions with his fellow humans who all adore him as he has a lot of love and advice to give them shows you how wonderful a man he really is. He cares deeply about the world around him and comes across as a true visionary. Even when he is simply drilling he has this sense of poetry about his past comparing the drill to what he used to drill into his own head “drink, drugs and bad relationships.”

Bruno himself has been homeless and has serious health issues which the film maker Elizabeth Rasmussen tackles touchingly and with affection allowing you a real intimacy into Bruno’s life. The film really shines in these moments when it just allows Bruno to exist in the present and doesn’t interfere. This approach make us aware of our own surroundings and let us be grateful for what we have as you can see how happy he is through simpler things that we might take for granted. 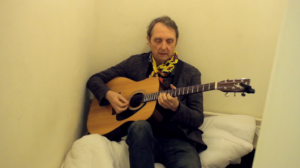 On the surface you wouldn’t recognise him as a man who’d been in a 70’s punk band whilst the movement was in full flow. Bruno is certainly an unconventional man as his idea from when he was young was to reject the establishment and maintain his integrity as an artist rather than become a sell out like those who had come before him which is why he changed his band name from The Rejects to The homosexuals in order to keep the record labels away and I think he achieved in maintaining his integrity with aplomb.

“It feels like he’s got integrity. He knows what the truth is he knows what his truth is and he sticks to it.”

Even to this day he stays true to this word and is a very humble and honest man who is at peace with himself. The film follows a very personal journey of his which encompasses the mood of the time and gives a fresh perspective on the punk movement through his eyes. The documentary allows him to reminisce and is interesting in the way it brings him back to places he used to reside in order for his anecdotes to be heard. You get a glimpse of what it was like to be young in that era as well showing you footage from those years.

It is an honest film in which it feels like the director’s own vision can get a bit lost in at certain moments during the film but it’s not really to its detriment when Bruno is so captivating to watch.  The movie reflects on the passage of time and although life changes over time and as a person you get older, your inner soul remains the same. You can see from how he was back then to how he is now ,although there is a difference since he’s been through life, he is the same man inside. Elizabeth Rasmussen’s intimate style certainly still comes to the front for the majority of the picture as she comes to terms with her own techniques as a film maker on this enticing journey.

I’m thankful that this film got made because it allows us an insight into Bruno Wizard’s magic. 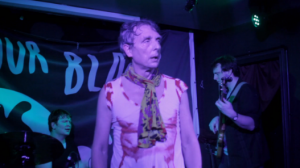